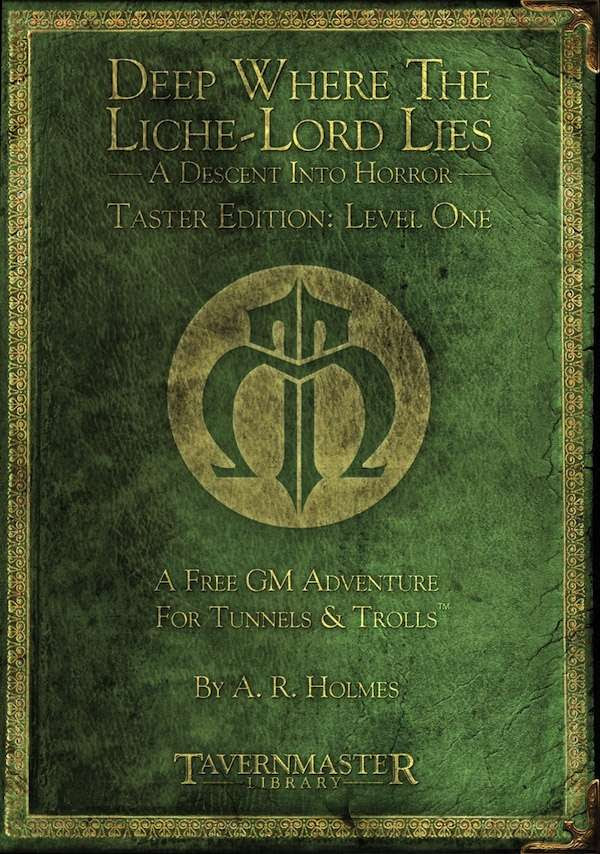 Written for use with the T&T 5e and 7e rules (and I suspect the upcoming 8e rules), Deep Where the Liche-Lord Lies (Level 1) is the first level of a multi-level dungeon and it includes some random tables and a small setting.

Group adventures for T&T are few and far between. Andy Holmes has written a few nice ones and this is one of the better ones.

The price is right for a "taste" of the fuller adventure and should be good for a couple of sessions of gaming depending on your group.

Free 'Taster Edition' - contains the complete first level of the dungeon. Try before you buy!

Beneath an ancient mausoleum, deep within the Forest of Maugaral, there is a mighty dungeon; a stronghold of goblins, ogres, and worse. At its deepest point, surrounded by earthly riches, lies the tomb of Vasarax, an ancient and malignant sorcerer. Though entombed for centuries, stories abound that the long dead mage has arisen as a powerful Liche-Lord. It is said that whoever steps foot into his resting chamber will instantly perish...

Deep Where the Liche-Lord Lies: A Descent into Horror is a huge, multi-level GM adventure for Tunnels & Trolls, compatible with 5th or 7th edition rules. It is a tough dungeon that will test even the strongest of parties as they penetrate deeper into its gloomy depths. Everything a GM requires to run what would amount to a mini campaign can be found within its pages, including detailed maps of each level and the surrounding terrain, plus descriptions of all of the rooms and contents. This is the largest GM module ever produced for T&T from the master of gothic horror adventures, Andy Holmes.
Posted by Tenkar at 2:34 PM

Email ThisBlogThis!Share to TwitterShare to FacebookShare to Pinterest
Labels: free, Tunnels and Trolls