The Tenkar's Tavern Overdue Kickstarter List - The Worst of the Worst

My love affair with Kickstarter is coming to an end. There seems to be a lot more screwing and a lot less satisfaction than I expected.

Lets look at the projects that had such promise and left me hanging...

What can I say that hasn't already been said? Last backers only update on April 17 was brutally honest. At this point, I expect no product. Here's a snippet:


Well, and here comes some brutal truth: The cost of the Player's Handbook Kickstarter was astronomical. Every decision that I made that I thought was a minor decision (like glossy paper in the PG) turned out to be an awfully expensive one. My inexperience and excitement over the success of the campaign collided to turn me into a donkey business man. So, we have officially approached the point where I'm either dipping into GMG funds or self-funding the shipping, printing of the Starter Guides, etc. It's not your problem, and I don't want to make it your problem, but it's the harsh reality of where we are and why things will take so long.

Awful Note: Things have clearly deteriorated. Myth & Magic is likely doomed now because of my mismanagement of the campaigns and the fact that with my new job, I lost a significant amount of time that I used to happily spend on the game. Goodwill may or may not be salvageable.

What can I do? I'm not sure. I plan, regardless of public hate, to finish the Kickstarter campaigns and deliver the product. Hopefully, somewhere along the line, things will go from negative to neutral. They may never be positive, but heck, I'll take neutral.

14 months late and still no closer to shipping . As per the May 27th update, this is how things stand. Snazzy but depressing. 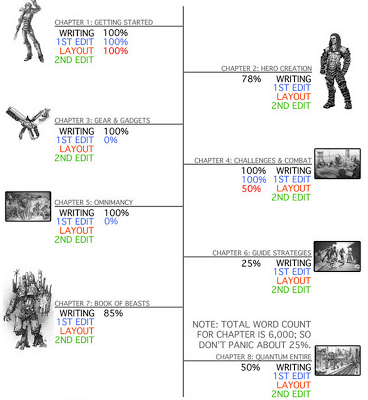 Cubicle 7 is now taking over distribution. Which means it will probably release, but I can't get angry at C7 for being late as usual as Gareth hasn't completed the project to turn it over to them. 18 months late and going strong. Huzzah!

Long story short - I am NEVER going to spend my money on ANYTHING associated with Mike Nystul EVER again. Holy shit. The spell Nystul's Magic Aura is aptly named, as all it does it give the impression of magical value to utter shit. Mike did pull off some magic this time around, and these projects MAY actually release at some time, but that is no thanks to him. Money for the projects was spent on a Con failure and building a non existant business. What did he do when he ran out of money? Another crowdfunding attempt. He's like the pyramid scheme of Kickstarter.

I hate putting Brave Halfling on the list, as I know it's been a shit year for him on a personal level and he and his family are in my prayers, but this was beyond late even before all that. Next month will mark a year late for any shipped products. Not so sure if I expect them at this point and I'm strangely okay with that.