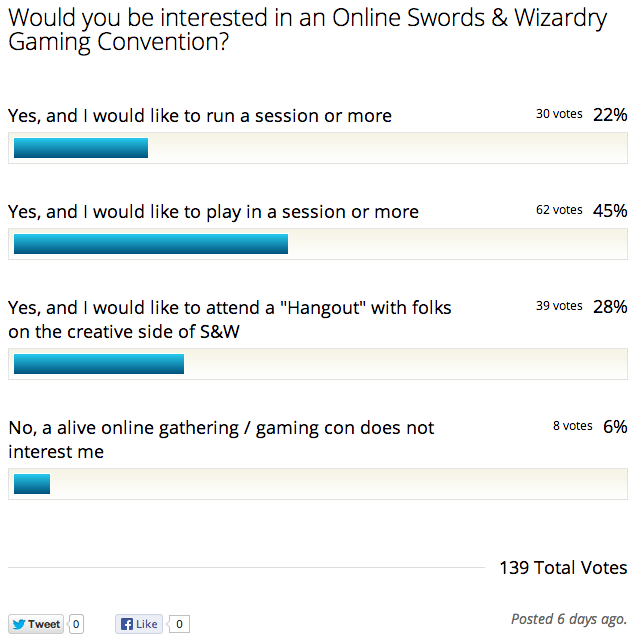 Let's see. 139 total votes. 94% of those votes would be interested in gaming and / or "Hangouts" with some of the creative side of Swords & Wizardry. (I suspect few that aren't interested bothered to vote, so the percentages are surely skewed. Still a nice number of responses, even with some multiple votes)

I think there is enough interest here to start with the broad strokes on how to organize this. I think the key here is not trying to replicate a "real space con" with a "cyber space con". The last attempt at that was an abysmal failure and that is not something anyone has a desire to repeat.

The strength of an online gathering / convention is the ability to get people together for gaming purposes from across the world and still allow them to game from their own homes. An online gaming con is simply about gaming, not vendors and publishers and the like.

It's needs about gaming - playing games and talking about games. Anything that gets on the way of that needs to be left behind.

Earliest we would be looking at this is mid to late September, so lots of time for thoughts, ideas, brainstorms and brainfarts ;)

As always, for this to be successful, it needs to be for the community by the community. W do have a most awesome community in the corner Swords & Wizardry calls home.