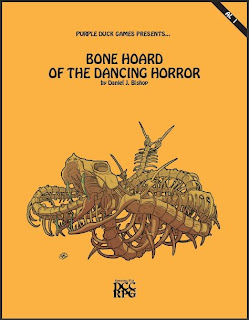 First things first - it's a 2nd level adventure, and at the moment the only second level adventure released for the DCC RPG. Which means I probably won't have a chance to run it until September or later, but that is fine.

The map is laid out like a classic fantasy RPG dungeon map, and it looks great. I should mention at this point that there is a copy of the Referee's map at the end of the adventure, but this time without the rom numbers. The unnumbered map is also included as a hi-res stand alone JPG. Yep, Purple Duck Games understands what is useful to enhance a game session being run online via one of the various VTTs or even Google+ Hangouts. It's little things like this that mean a lot.

Did I mention that the PDF is bookmarked? Unlike larger PDFs, this wasn't needed, but again is a nice touch and certainly useful for navigation.

I am going to make one small suggestion for the future - maybe a second copy of the GM's map can be added in the next release (this suggestion applies to pretty much all adventure publishers). It would make reading the PDF that much easier if I could have a copy of the map and a copy of the PDF side by side on my monitor as I read through the adventure. If you think about it, this is why the early TSR adventures were printed on the inside of the removable adventure cover - so the map and the text could be read side by side. Just a thought. (Edit: Purple Duck Games is already updating the file to include a sperate Referee's Map - literally minutes after this post went live. My kind of publisher ;)

Back to the adventure. There are a handful of magic items. Nearly all are single use, and maybe not even that many uses. Still, a party that perseveres to the end should be amply rewarded. Well, maybe not amply, but rewarded on some level ;)

As for the adversaries, they range from strength in numbers to damn dangerous on their own, which is one of the reasons I like the DCC RPG so much - everything can be a threat.

I'd love to delve deeper into the adventure itself - it is a wizard's workshop and you can guess that much of the fun is related to that fact, but I'd hate to give away a spoiler. I suspect it will be a decent challenge to a 2nd level DCC RPG party and I look forward to running it.

Bone Hoard of the Dancing Horror is available for $2.75 at RPGNow.


Terrible horrors lurk in the workshop of Dellspero the Philosopher. Though Dellspero has been missing for ages, does his lair still contain the secret magics he worked with?

What terrible dancing horrors did Dellspero unleash when he offended the Chaos Lords.

Bone Hoard of the Dancing Horror is a Dungeon Crawl Classics Role Playing Game adventure designed for 2nd-level characters or can be easily adapted for use with higher or lower level characters.

All products in the Adventure Locale line present one or more dungeons that can be quickly picked up and used for a session of the Dungeon Crawl Classics Role Playing Game.