Do you member the classic Marvel Comic's series What If?  What If Spiderman had joined the X-Men type of story.  Well, Mazes & Minotaurs is an RPG What If.

What if the first RPG didn't dray it's mythology from Tolkien, King Arthur and other fantasy sources but instead drew upon Greek mythology.  The result is Mazes & Minotaurs.

It helps if buy into the "alternate timeline" when you go to the website ;)

It is a well done, alternative style RPG.  I can see bits of D&D, Tunnels & Trolls and Runequest in the rules we are given.  (Not to mention the cover to the M&M Companions is ripped from Avalon Hill RQ... but it's a fun rip).

As most of you probably remember, the year 1972 saw the release of MAZES & MINOTAURS, the first ever-published fantasy roleplaying game, opening a new era of heroic adventure and mythic odysseys… 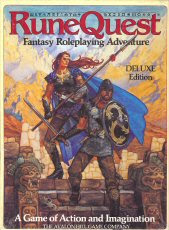 Fifteen years later, in 1987, Legendary Games Studio published a fully revised, streamlined and expanded version of M&M (which became known as Revised Mazes & Minotaurs or RM&M for short) in the form of three core books (the Players Manual, the Maze Masters Guide and the massive Creature Compendium) and a fourth optional book (the M&M Companion), all with full-color covers and quality B&W interior art.
In 2007, to celebrate the 20th anniversary of this mythic event, the resurrected Legendary Games Studio is happy to bring you Revised Mazes & Minotaurs in PDF format (yes, the whole four books !)… FOR FREE.