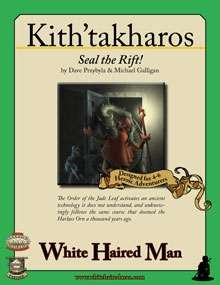 Alright, I guess I need to give full disclosure on this review - I play test part of this.  Heck, this is the adventure I played in via Fantasy Grounds 2 that let me to seriously consider running a game with the Savage Worlds rules.  To me, that says a lot about the adventure itself, as it sold me on a set of rules I truly had very lithe knowledge of (and no actual play experience).  So, I may be a bit biased.  Sue me ;)

First things first.  Seal the Rift! comes in two flavors - Savage Worlds and 3.5e.  Each flavor comes in 2 different packages - a PDF with the Fantasy Grounds files, or without.  I'm very glad to see White Haired Man releasing their products in a PDF only format in addition to their FG2 combo - it gives them a larger base to sell their products.

Okie, on the the review.  As I played in (and currently have) a PDF copy of the SW version, that's the one I'm going with.

Bookmarks - if you read this blog on a regular basis, you know that publishers that omit bookmarks from their PDFs tend to hear me bitching about it.  Not this time.  Nicely done guys!  We have bookmarks!

Artwork - I want a print of the cover art.  Really.  I'm serious.  Hook a lad up.  Oh, the rest of the art is pretty decent too, but this is the highlight to me.

The Adventure - The PDF itself is very well laid out and easy to follow.  Did I mention it has hyper links in addition to the bookmarks?  Now I need to bitch about publishers that don't hyperlink ;)

It includes a regional map and a map of the Town of Kith'takharos.  Both are pleasing to look at without being overly detailed, so if you like maps that spell out everything you may need to flesh things out yourself.  For my needs they are fine as is.

The adventure itself is designed for a party of Heroic Level Savage Worlds characters.  It should present a decent challenge (I should know - I was the only PC to die in my play test session).  I'm going to hazard a guess that it should take 2 to 3 sessions to complete, as we completed about a third or so in our play test (with lots of hand holding for the Savage Worlds Rookie - you guys were great...heh).

He waited, standing like a statue just inside the entrance of the Administration Wing. He had not moved in a thousand years, having no need of food or rest, and never suffering from fatigue. He existed to serve his master, which gave him pleasure. And every moment of those thousand years was pleasing, for his Master had bid him to wait.


Then a whisper of thought brushed his mind. His eyes regained focus and he turned his head, recognizing the pyramid of mummified Harlass Orn corpses he had carefully assembled so long ago. He sensed his Master's voice, faint yet unmistakable. The rift had opened again, and Agurth-Plaga called to him.


Months have passed since the Harlass Orn were freed from the Veilwalker Dreamseeker in The Dreamers Awaken adventure. One of the survivors, the scholar-mage Zzhastor Brune, learns that the people of Kith'takharos have begun using the ancient Harlass Orn Teleportation Towers. These towers precipitated the Harlass Orn downfall, for the magic employed in tower teleportation opened a rift that allowed the extra-dimensional Veilwalkers to enter normal space and destroy the Harlass Orn.

Seal the Rift! is an OGL 3.5 adventure for 4-6 characters of Ninth and Tenth Levels, with an estimated 15 hours of playing time. Zzhastor Brune teleports the characters into Nhamah, where they will navigate the automated defenses before confronting a powerful Veilwalker construct determined to prevent the Aether Bind from being activated.

This 42 page PDF contains all the information necessary to run the adventure.
The basic Kith'takharos Setting is available for free in a rules agnostic format at www.whitehairedman.com
Posted by Tenkar at 8:51 PM