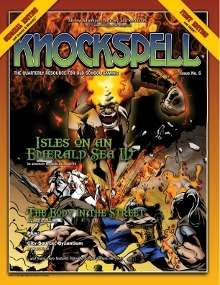 Where were we in the review?  Oh, yeah, The Body in the Street.  It's a piece of fiction by Al Krombach. I was never one for short pieces of fiction, but then I started reading Solomon Kane and found I enjoy the medium.  I haven't read this piece yet, but it's on my list to read.

Ouch, My Brain Hurts! is a psionics article for S&W by Robert Lionheart.  I think Robert's first line sums my thoughts up pretty well: "Are psionics an unholy heresy or a valuable aspect of old School fantasy roleplaying?"  I'm on the fence on it myself, having experimented with it in AD&D 1E and I never found it very satisfying.  Robert's system requires PCs to sacrifice XP earned to acquire psychic powers.  It's a decent trade off for the additional power the PCs may attain.  Being that the powers are limited in the amount of uses per day, they may or not be worth the XP cost, but it may be a viable option depending on the type of campaign you plan on running.  It's a long article, and would have been a viable PDF in it's own right.

John M. Stater (best known for NOD magazine, and the man I borrowed some OGL content for my Bard class design) presents us with Catacombs of Ophir.  It's a nice little dungeon under the city-state of Ophir (itself detailed in part in NOD 2).  I don't recall a level range for it, but I'm going to guess 2-4.  Looks good, and it marks the second adventure for this issue of Knockspell.

Next up is A Duet if Bards.  The first part of this section is by Doyle Taverner.  Here he presents us with an adaptation of the original Bard class presented in The Best of the Dragon, Volume 1.  He cleans up the fuddilly bits, such as using thief abilities with heavier armor (aint happening) and spell casting in armor (also aint happening).  For me, the highlight is the page on magical instruments for bards.  Leaves me wishing I had included some, but I think Doyle gives a nice assortment to choose from.

The next part of A Duet of Bards is Tenkar's Bard.  It's short and sweet.  I like it, but then, I should ;)

Locks and Traps as a "Mini-Game" by Jim Pacek follows.  Not what I expected.  Holy Crap but I really like the system he uses.  Color me surprised, and I generally detest "mini-games in a game", but this isn't so much mini-game as a task resolution system.  It gets my "Kick Ass!" Award.  First time I've ever given one out.