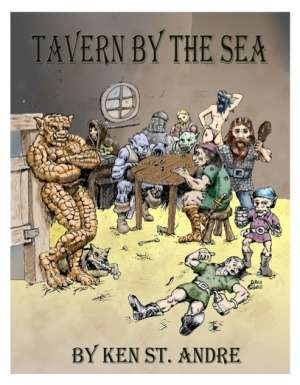 It's been a while since I've had the opportunity to look at a new Tunnels & Trolls solo (I'm waiting on my 2011 Free RPG Day T&T Solo to arrive in the mail).  Today, we give you Tavern By The Sea, by Ken St. Andre and Andy Holmes.

Here's the interesting thing about Tavern By The Sea - there's a Mini-Adventure snuggled in the back of it. I love the T&T solo, but adventures for use by a party are few and far between.  Frargg--The Pirate Nest isn't huge (its about 6 pages long), but with the exception of Outlaw Press products, this is the first GM Adventure for T&T I can recall being released in... 20 years?  more?  The last was Isle of Darksmoke as far as I can remember.

Oh, apparently part of the 2011 Free Game Day release is a GM adventure.  Damn cool!  Seriously, if you want to put Tunnels & Trolls into the hands of more gamers, you have to give them a game they can play with others.  Want to add more solo players?  Bring in more players in general.

If I told you the solo doesn't take itself, or you, too seriously, would you be surprised?  I wasn't either.  Fun T&T soloing to be had.

Now if Ken and Rick could just get this stuff out even quicker ;)
Posted by Tenkar at 4:43 PM