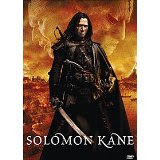 Let me be clear... I do not know much about Solomon Kane with the exception of what I read in the Savage Worlds Solomon Kane RPG.  Oh, and I really need to re-read the RPG, as I forgot pretty much all of his background except for the funny Pilgrim hat.

Good enough to get my fiancée off the couch she was dozing on and get her sitting on the floor in front of the TV.  She was enjoying the fight scenes as much as I was.  Solomon is pretty kick ass.

As best I can tell, the film's story isn't based on any of the Solomon Kane stories the Robert E. Howard wrote, but it tells of Kane's origin.  It's an interesting take on redemption.

It has gotten me to further consider running a game using Savage Worlds, and the Solomon Kane RPG to boot.  Need to dig it out of the storage closet I think.
Posted by Tenkar at 1:52 PM