Alright, lets see if I can write this without Blogger crapping out on me ;) 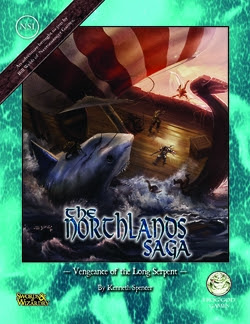 The Northland Saga Part 1, Vengeance Of the Long Serpent, is an adventure that comes in two flavors: Pathfinder and Swords & Wizardry.  Today we are looking at the S&W version.  After removing the cover, credits, contents and OGL pages you are left with 16 pages of fairly dense text, which is a decent size for an adventure meant to be run in a session or two.

My first impression is that this adventure would make a decent mash-up with LotFP's Weird New World Campaign setting.  Yes, this is more Viking in flavor and WNW is more Finnish in flavor, but I think the two would mix well.  The majority of the adversaries / monsters in this adventure aren't over the top fantasy, which should help in fitting this with WNW.

I'm a little surprised that the first adventure in a planned 10 adventure series is written for levels 5-7, but I guess one could always move the party north as they gain some experience and survivability.

I like the fact that it isn't much of a dungeon crawl but is primarily story driven.  This does however, lead us to the one issue I have with this adventure.  To give the party the backstory, we have an NPC regaling everyone with his deeds.  I estimate his tale to be approximately 750 words or so... one side of a two column page... that the DM has to read to the players.  As a player, unless my DM is a thespian, this is gonna put me to sleep.  The rule of "show, don't tell" comes into play I think.  I'm not sure yet how I'd rework this if I were to run the adventure, but it's not the best way to start an otherwise well written adventure in my opinion.   Still, lots of pieces to steal even if not used whole for a Nordic campaign.


This series of adventures takes place in the frozen north, where men are men, beer is ale and monsters are, well, scary. Who has not loved the setting of the 13th Warrior or wished to relive the Frost Giant's Daughter by R.E. Howard? Heroes will fight evil in the cold lands, sail the treacherous ice filled seas where sea monsters swallow ships and crews and feast in fire-lit halls with Vikings! Planned as a series of 10 modules, this series will begin in January (appropriately, due to the cold). More information will be added as it becomes available.  Written by Ken Spencer, this series is sure to send shivers up even the bravest adventurer's spine!

Vengeance of the Long Serpent

Pull on your hauberk, ready your shield, and take up your axe, the tide is moving
out and it is time to set sail on a voyage of adventure. In Vengeance of the Long
Serpent the heroes sail north into a land of murder, savagery, and madness to face a reawakened dark god and his deadly cult.
Posted by Tenkar at 4:03 PM