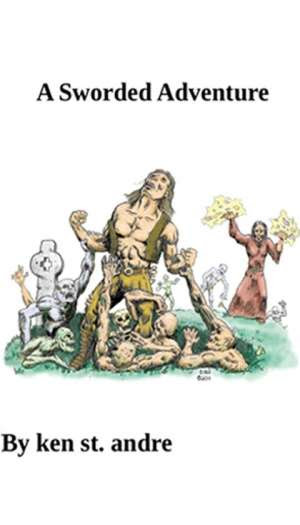 I was wondering when my next Tunnels & Trolls fix would hit.  Look no further, cause it's here with A Sworded Adventure by Ken St. Andre.

It's funny, because when I saw the title I thought it looked familiar, and it is, sorta.  It is a rewrite and expansion of the original A Sworded Adventure that appeared in Sorcerer's Apprentice #6 (back in 1979).  Pretty cool, huh?  (Yes, I have this issue)  This version is written to be compatible with either the 5.5 or 7.5 editions of the rules (and probably works just fine with the 5.0 and 7.0 editions too).

It's for a warrior of 50 combat adds or less, and is integrated to some extent with the Naked Doom and Arena of Khazan solos, as certain events can drop your character into one or the other.  If you don't have them, there are alternatives, but really, you know you want them ;)

It's a short solo, about 23 pages when you remove the covers and credit pages, but it's well written and should be entertaining (at least I think so).  It could easily be run using the free version of the rules I have linked to the left... but as always, one should remember that survivability is greatly enhanced by going as close to the recommended combat adds without going over.  A complete newb without exceptional scores probably won't last long.  Then again, creating a new character is pretty quick in T&T, so death isnt much of an issue
Posted by Tenkar at 8:25 PM

Email ThisBlogThis!Share to TwitterShare to FacebookShare to Pinterest
Labels: Reviews, the trollish taproom, Tunnels and Trolls