Sacrosanct Games has four adventures in it's $ 1adventure series written for OSRIC (and their own house system Altus Adventum).  As always, they are pretty easy to convert on the fly to any of the OSR Clones / Simulacrums / Etc.

They are as follows:

Lair of the Goblin King is the first in a series of adventures that takes the characters from the beginings of their career to eventual heroes.  It is also the first in the unique series of products that includes both an OSRIC compatible version and a version for the Altus Adventum 2nd edition game.

This Adventure is designed for 4-6 1st level characters who find themselves broke and stranded in the city of Piarth.  Just about out of food and ready to give up on an adventuring career, they hear word of a reward for anyone who can find out what is attacking caravans to the border towns. 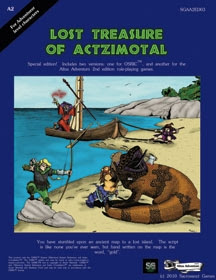 You have stumbled upon an ancient map to a lost island. The script is like none you've ever seen, but hand written on the map is the word, "gold".

Lost Treasure of Actzimotal is an Adventure Module designed for 5-8 characters of level 3-5 or of Adventurer experience title level, depending on system used.  What make this product unique is that there are two versions included in this PDF.  One version is for OSRIC, AD&D, LL, etc, and the other version is designed for Altus Adventum 2nd edition.  Essentially you get two versions for the price of one!  So use your favorite system and enjoy the adventure. 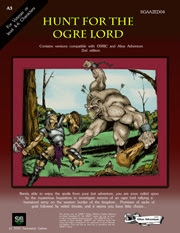 Barely able to enjoy the spoils from your last adventure, you are soon called upon by the mysterious Inquisitors to investigate rumors of an ogre lord rallying a humaiond army on the western border of the kingdom. Promises of sacks of gold are followed by veiled threats; it seems you have little choice...

A3, Hunt for the Ogre Lord is the third in the A series of adventures, taking the characters on an epic adventure to save the kingdom from the horde forces that threaten.  This adventure is designed for 5-6 characters of level 4-6 or of Veteran status, depending on which system you are using. 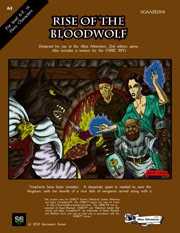 A4, Rise of the Bloodwolf is the final module in the A series of $1 adventures.  Treachery is revealed, and the party has the opportunity for revenge.  And oh, how sweet it will be.

So bring back that old school atmosphere and prepare to "kill them and take their stuff!"


I guess in New School talk, this would be a 4 part Adventure Path for $4 bucks.  Not bad at all.  Of course, I'm walking the Tunnels & Trolls addiction at this point, so my conversion will require just a bit more effort then the rest of the OSR movement.  That oaky... even if I just steal pieces its a decent investment.
Posted by Tenkar at 9:00 PM