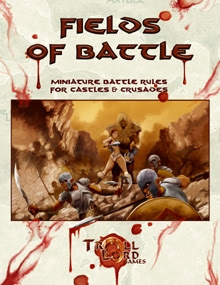 I'm actually fairly surprised and impressed with the latest (at least in PDF format) release from Troll Lord Games for their Castles & Crusades RPG.  Fields of Battle is a package of mass combat rules, full color counters and outdoor battle mats.

My last attempt to try and do mass combat with any of the D&D/ AD&D type games was Battlesystem.  Not fun.  At first glance (which is all I've had tie for so far) Field of Battle looks much less painful.  Actually, it looks like it should work pretty well.

Perhaps my favorite thing in the whole package is the idea of using it with other OGL based RPGs:

Fields of Battle™ and Other Game Systems

While Fields of Battle™ is as a mass combat system designed for use with Castles & Crusades (C&C), the system is highly adaptable to your favorite fantasy role-playing game, especially those games (old or new) using a 20-sided die(d20) for game resolution. Converting for use with d20-basedgames, in fact, is easiest overall, as these games have similar game concepts to those presented within C&C and Fields of Battle™: armor class (AC), hit points (hp), hit dice (HD), attack bonuses (AB), movement rate, morale, and saving throws. Additionally, many of the monsters and player races will be familiar to d20 gamers. Still, Game Masters (calledCastle Keepers in C&C) unfamiliar with d20-based games can easily master these game concepts, making Fields of Battle™ a viable mass combat system for those games, as well—with a little translation work on the Game Master’s part.

Yep, with a little work, this could fit in your Labyrinth Lord or Swords & Wizardry DM's toolbox, which is always great to add to.

The rules include sample scenarios, which are good to read to get a feeling of how to balance a battle, but if I were to use these rules it would be as part of a campaign, not as a stand alone product (it can be used as either).  You do not need to buy the C&C rules to use Fields of Battle - the Quickstart rules should be enough to cover any terms you may not be familiar with.

It's a good, complete product that addresses a niche rarely covered in most RPG rules - mass combat.  Whether you need such rules for your game is up to you, and depends on the story you are telling as a GM.