When I think of a D&D based SciFi Game these days, I think of Star Siege.  Problem with that game is that the engine strays so far from from it's gaming roots it's almost hard to see them. 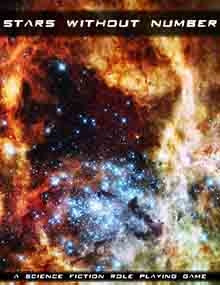 That does not appear to be the problem with Stars Without Number from Sine Nomine Publishing.  Available for the exorbitant  price of FREE, this 210 page PDF is D&D in Space - that's in the meaning of D&D mechanics.  Three core classes (Expert, Psi and a Warrior Class), skill packages, D20 for combat, 2d6 for skill resolution (I like bell curves) - did I mention its free?

I've barely scratched the surface of this fine PDF (which is an awesome resource to steal tech stuff for you Old School RPGs if you are so inclined).  I'll be reading this over the next few days.

The year is 3200 and mankind's empire lies in ashes.

The Jump Gates fell six hundred years ago, severing the links between the myriad worlds of the human diaspora.

Now, the long isolation of the Silence falls away as men and women return to the skies above their scattered worlds.

Will you be among them?

Stars Without Number is a retro-inspired science fiction role playing game influenced by the Old School Renaissance. The contents are compatible with most old school clones and are designed to be easily imported to your own favorite gaming system. In addition to a complete pre-made stellar sector, Stars Without Number offers GMs and players the tools to create their own sandbox-style adventures in the far future.