Not a Review (Yet) - Wordplay Basics

Just recently released for free on RPGNow / DriveThruRPG, Wordplay Basics from D101 Games is a new RPG that uses d6s by the bucket.  Well, maybe not by the bucket, but if you are a Tunnels & Trolls player, you probably have the right number of dice. 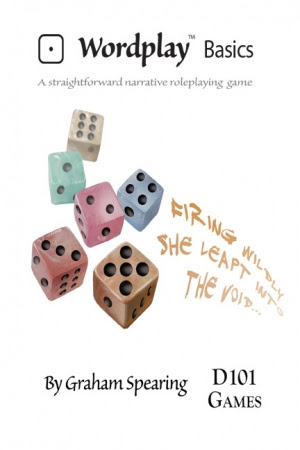 I haven't done more then skim the first few pages, but from what I can tell the system look fairly free form and rules lite.  Oh, did I mention it's free?  It's been a while since I posted one of those ;)

any created setting or genre that you wish to explore.

The game features the following:

• Free flowing character creation, allowing a player to describe their alterego in the game and use those descriptions as Traits (which are then split between Body, Mind and Soul categories)

• A dice building game. Describe what your character is doing and make use of as many advantages as you can to build as large a hand or pool of dice as possible.

• Roll your dice and count up your successes and the highest total wins, only the dice that land on the table count!

• Create goals for your character and drive them forward to succeed.

Instead of numerous complicated rules, Wordplay provides story telling opportunities that are translated into dice for your characters.

The game is meant to be rules light, open and encourages players to give vivid descriptions that build a shared, character focussed, story.

Wordplay requires traditional six sided dice to play and many of them!

This plain text Basic edition of the game, gives you the core system which is everything you need to play the game except your imagination and a hand full of dice.