Yep, time to get back to some mini-reviews ;)

Today we look at Kobold Quarterly #15.  In any ways, it is a direct descendent of Dragon Magazine (may the gods of Greyhawk rest it's soul - yes, the current incarnation doesn't count).  Wolfgang Baur is the editor, and his Open Design company is the publisher. 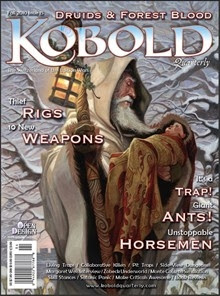 KQ cover' both 4e and Pathfinder, but even those that prefer Old School will find stuff to sink their teeth in.  It is invariably well written and well put together.  That being said, I find the 4e stuff to be more then I generally want, but I understand why they want to cover both markets.  It's a divided market.  The Pathfinder articles I find much more useful, as they are easier to use with older D&D variants.

This issue includes articles by James Lowder, Monte Cook, Wolfgang Baur and many others.  The James Lowder article is almost worth the price of admission by itself, as its a nice insight into the World of TSR under Lorraine Williams.

I do have some issues with the issue.  Articles are not necessarily labeled for the system they are written for, which is annoying.  I had to read a page of the article on critical hits before realizing it was for 4e.  Pathfinder stuff I can convert, 4e I generally don't bother with.  Shame too, as the article was well written.

My other issue is with the ads.  Ads in a PDF edition of a magazine should be hyperlinked as a default.  Many weren't.  Shame really.