Looks like I’m finally getting around to reviewing the latest Fantasy Grounds releases.  About time I say ;) 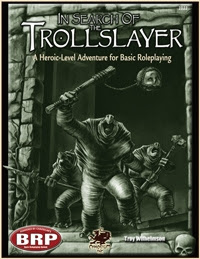 Anyhow, ﻿In Search of the Trollslayer for Fantasy Grounds and BRP is a conversion of the Chaosium produced ﻿In Search of the Trollslayer adventure for the Basic Roleplaying System.  It’s a fun and deadly adventure for experienced BRP characters, and if there is an issue with the adventure itself (not the conversion) is that there really isn’t any useful series of introductory adventures set in a fantasy setting for BRP.  I know in many ways BRP is a toolkit, but I would like to get my players’ characters the experience needed to play Trollslayer, as opposed to just creating experienced characters or using pregens, but that is me.

As for the conversion to Fantasy Grounds, it is well done.  Extensively tabbed and laid out.  I didn’t do a side by side comparison to my PDF copy of Trollslayer, but it looks to my memory to be a nicely converted duplication.  I like BRP and I love the fantasy genre.  I will probably run this with the pregens as a one shot - or multiple shots as i suspect this will take a few sessions to get thru.

Deep in the heart of a perilous swamp lie the ruins of a cursed shrine. Within its crumbling walls lies an artifact of ancient power, a spear called "The Trollslayer." Heroes must now retrieve the forgotten weapon, but can they overcome the evil that resides within the rotting temple?

In Search of the Trollslayer is a heroic-level fantasy adventure for Chaosium's Basic Roleplaying RPG. Includes six pre-made characters so players can jump right into the action.