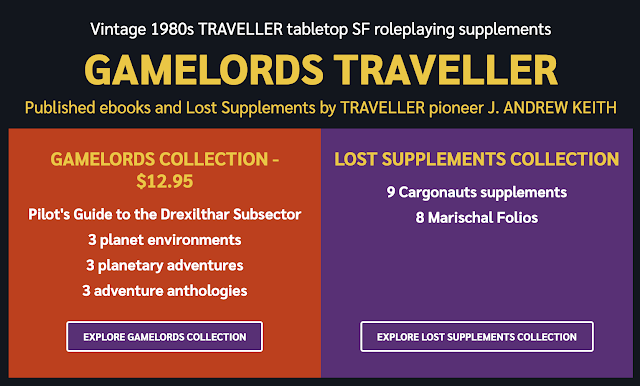 Gamelords is a company I knew about in the 80's era of my gaming, but not one that I had purchased content from. My Traveller purchases were all from GDW. God, but I was focused on purchasing supplements from the actual game publisher only in those days ;)

You can snag the Gamelords Traveller Collection for as little as 12.95. Damn, it is tempting.

Traveller! This Gamelords Traveller Bundle presents .PDF ebooks of 1980s Classic Traveller tabletop roleplaying supplements from two of Traveller's earliest third-party publishers: Gamelords Ltd and Marischal Adventures. These primordial indies published many sourcebooks and scenarios by two of Traveller's most prolific designers: J. Andrew Keith and William H. Keith. Though later known for Traveller landmarks like Murder on Arcturus Station, Nomads of the World Ocean, the Alien Modules, and much more, the prolific Keith brothers started by self-publishing their own short "Folio" mini-scenarios (1981-82), followed by ten impressive booklets through Gamelords (1982-84).These titles date from the time publishers printed their books on dot-matrix printers, yet this timeless material can still freshen any space-opera roleplaying campaign.

For just US$12.95 you get all ten ebooks in our Gamelords Collection (retail value $60) as DRM-free ebooks, including A Pilot's Guide to the Drexilthar Subsector; The Desert, Mountain, and Undersea Environments survival guides; three adventures keyed to the Environments terrains Ascent to Anekthor, The Drenslaar Quest, and Duneraiders); and three anthologies of short scenarios (Lee's Guide to Interstellar Adventure, Startown Liberty, and Wanted: Adventurers).

Traveller scenario Trading Team from Marischal AdventuresAnd if you pay more than the threshold price of $24.10, you'll level up and also get our entire Lost Supplements Collection with seventeen more titles, including eight of the Keiths' early Marischal Folio mini-scenarios and nine titles that lay neglected until 2000, when Traveller fan Paul Sanders founded a company called Cargonauts specifically to publish them. The "Lost Supplements" sold out their 500-copy run almost immediately -- but now you can get them in .PDF for a bargain price.