A Quick Down & Dirty NTRPG Report from Not Erik! 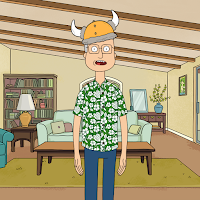 Unless you only come to the Tavern to read my posts (sorry for completely dropping the ball last week. I thought Memorial Day was actually Sunday. Not the holiday, but when I woke up on Monday and went out for breakfast I was thinking about what I was going to post, not realizing it was Monday. D'oh!) you have to know that North Texas RPG Con is going on.

Pretty much it's the one time I get to sit and visit with Rachel, er Erik...yeah it's Erik I want to see......

For the most part NTRPG is my "one con" of the year. There are others that I may be lucky enough to attend, but it is NTRPG that I schedule away from work a year in advance as my only "for sure" vacation. Don't even joke about me having to work 'cause it's just not going to happen. This is the one time of year I've promised myself I'm going to play games, bullshit with friends, and hopefully make some new friends. Lately my battery's been rather low and it's these opportunities to recharge that I hold extremely precious.

NTRPG is a great convention and this is the first year after the death of the founder, Doug Rhea, passed away. His successor, Gary Oliver, has done a damned fine job picking up this particular ball and running with it, although I'm sure he'd disagree and blame any success on his staff.

Anyway, one of the things I just love about NTRPG is the camaraderie. This is only my 5th year attending and I can tell you that I definitely "feel the love". The last couple of years Doug graced me with some quality bullshitting around the table, and I even had him as a GM for a game. So many people here have really taken that quality of Doug's and shared of themselves, on several levels.

One great event that they only have here is the Midnight Auction, hosted by satan. I'm using the small "s" because it's just Bad Mike in a devil's hat and horns, but he plays it up. Before hand several people, myself included, were sharing some nice (mostly) Bourbons with each other and everyone is in a great mood, despite it being so late. The auction is a bit fast and loose and most of the items are kind of BS or tongue-in-cheek jokes, often at the expense of long-time convention attendees/industry "professionals" (this auction is far from professional!) The occasional serious-type item is available for bid as well, so it's not just fun & games, although if you are coming to the auction in an attempt to get something good for cheap, you're barking up the wrong tree.

I got my second-row seat and bid number for $10, a bargain if you ask me. I'm good with avoiding the 1st row, although there wasn't supposed to be any Gallagher-type situation, you never know......

I bid on a few items, but there was only one thing I had to have and then one thing I wanted to have. The first was a Tom Tullis/satan T-Shirt that I got for $50. This one was is Grey while the one I got last year was in black. I was planning on making some throw pillows out of them, which I may still do......

The second item I picked up was an older iron-on transfer for the very 1st NTRPG Con. I may frame it, but I think it'd be cool to just get a good-quality T-Shirt and actually use the thing! For $100 I figure I might as well enjoy it! 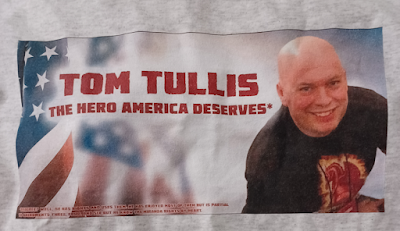 I didn't manage to get anything in the "serious" auction earlier in the day. One of the two things I really wanted went for $10 more than my maximum bid, but I had a max bid already in mind and who knows just how much that other bidder was willing to go. No worries, I was just able to spend that on a T-Shirt and an iron-on transfer! 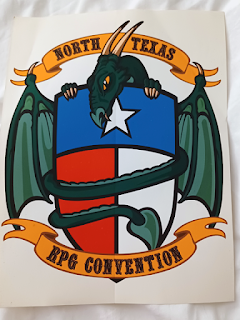 The games were great and I got some awesome stuff at the dealer's room, but that's all secondary to having fun making new friends and spending time with old ones.

Posted by Christopher Stogdill at 3:32 AM