Spotting Some D&D "Out in the Wild", and I Don't Think it's a Good Thing 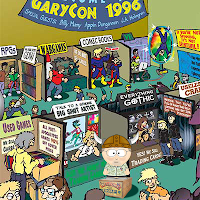 Now I know that Tenkar's Tavern is very much an OSR-centric blog, even if there is a good peppering of other games, systems, and general RPG news. Going off on a bit of modern/current edition D&D is largely going to be either "Who gives a rat's ass" or "Eff those guys." with our patrons here.

Still, something I saw today "out in the wild" really, really rubbed me the wrong way. Since I'm officially an old fart (turned 50 in June), AND I happened to have a soap-box, Imma going to bitch about it here....

.......and Erik will wonder why his stats show readers fleeing the page in the first 30 seconds..... 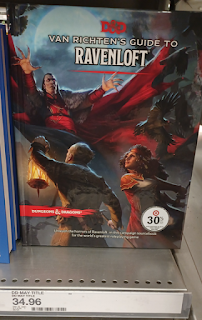 Anyway, I came across a couple of current edition D&D hardcovers at Target today. Now the last time I remember seeing D&D on the shelf at a big box retailer is...well never. Bookstores, sure, but a "regular" retailer, maybe I passed by some Magenta boxes on the shelves back in the day, but hell if I remember it. Waldenbooks was my go-to back then, and then it was usually just to rat-f**k the boxes for dice.

So while I think it is really great that there was not just one, but two D&D hardcover books for sale at Target (I didn't get a picture of the other one), the whole thing kind of pissed me off a bit. First off, where's the core books...where's the dice?

Don't get me wrong, I'd really rather see folks going to your FLGS to purchase gaming supplies, but if a retailer is going to sell a couple gaming books, then they should at least sell the bare, basic minimum of gaming supplies that you need to actually utilize these books. GMG, PHB, and basic dice....nothing fancy.

Again, while it seems like a good thing on the surface that these books are available at Target, what I'm thinking is going to happen is that these books aren't going to sell...especially at $35?! Really? Now I used to work retail management and while I'm not full-up on all the intricacies of purchasing at the corporate level, I do know that Target had to pick up a metric butt-load of these titles to get them on the shelves. I just checked and there are 1,909 Targets in the US, not to mention the distribution centers so even at a minimum...a bare minimum stocking level of 2 (one to show and one to go), then Target would need to purchase at least 3,818 copies, but more likely they got an average of six per store (some more, some less, and some still in stock at the distribution centers), so we'll round up to 11,500 copies.

Now I don't know about you, but I just don't see a great sell-through rate on those books, especially considering that you can't actually get anything else to run your game with at Target. For the sake of argument we'll pretend that they have a great sell-through of 50%, which means there are 5,250 books NOT being sold at your FLGS. 5,250 books not generating add-on sales of dice and other books.....

.....and what about the other 5,250 books? Those will probably get dumped onto the secondary market and also pull sales away from the FLGS.

Yeah, so all these reasons to bitch and moan a bit about Target selling D&D books.......that really isn't the reason I bothered to take the picture in the first place. Pretty much everything I've posted up until this point was literally off-the-top-of-my-head thinking as I started typing this out. Didn't even think about in general until I opened up Blogger. 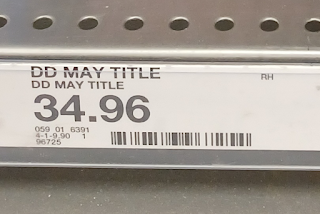 No, what rubbed me the wrong way was the shelf tag. I know, who gives a fuck about the shelf tag? Well, I do a bit....remember I did work retail management for a few years and was a general retail peon for more than that. I actually look at those shelf tags, and this one bothered me. I'll give you a second to check it out.

Yep, the thing that gets me is that this $35 book is not a one-off, but the "May Title", which tells me that there is a distinct possibility that there were a couple more books I didn't see and this is the beginning of essentially another D&D "Book of the month" type-thing.

I did play a bit of D&D 3.5 back in the day and I strongly disliked the frequency of the hardbacks that WotC/Hasbro released and it felt like a book-of-the-month club. It really just got to be too much and honestly I thought that was part of the reason that 3.5 "died". The constant release of titles not only felt like a crash grab, but made it seem obvious that there was a preference for quantity over quality.

Now I could be wrong on the finer details so I'll be a bit vague here, but I recall a specific KenzerCo book that had a lot of potential, but fell short due to Hasbro's money grab.....I'm calling it as I see it. KenzerCo was planning on two versions of their book, one for D&D and one for HackMaster. The D&D version kept getting denied and kicked back by Ha$bro for "reasons" and then months later pretty much cancelled because Ha$bro put out their own version as the book-of-the-month. Now the KenzerCo version, now having had way too many revisions, was hastily finalized/mashed together because it had cost so much to produce (I'm assuming man-hours/resources) and it did end up having some issues. In any case, I've seen the D&D and the KenzerCo book, and even with my own inherent biases, I can comfortably say that the D&D book was quite inferior.

What I feel this hobby definitely doesn't need is a glut of product taking sales away from FLGS and a return to expensive products that emphasize quantity over quality. New people coming into the hobby most likely get the newer/newest version of the game and possibly...hopefully spread out into the hobby. Flooding the market with cheap (but NOT inexpensive) product will harm not just these newer players, but the hobby overall.

Of course maybe I'm wrong and I'm just an old man screaming into the wind......kind of hope I am wrong.

Email ThisBlogThis!Share to TwitterShare to FacebookShare to Pinterest
Labels: d&d, not Erik, rant