Dark Horrors & Hidden Places - 3.95  2.65 -It is the year 1884. Many places sank beneath the earth after a worldwide tremor. Strange creatures spill forth onto the streets of towns and cities, as governments struggle to keep these monstrosities a secret. The lawful and wealthy hire the bold and adventurous to fix their issues and recover their possessions from places of wonder and danger, unseen but for myths and legends. Worlds have collided and adventure awaits the brave. Imagine mixing the worlds of Jack the Ripper, H.P. Lovecraft, Hammer Horror, and old science-fiction fantasy movies like Journey to the Center of the Earth in this OSR roleplaying game of dark gothic horror. 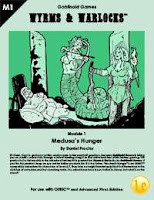 Wyrms & Warlocks: Medusa's Hunger 2.75  1.84 - Sit down, strap in, grab your ankles, and prepare to kiss your butt goodbye, because Goblinoid Games is taking you on a roller coaster ride through a tunnel leading straight to that old-school feel of 80s fantasy gaming. This product is the first module in the old-school fantasy RPG supplement series, Wyrms & Warlocks, by Goblinoid Games. If you like this product, keep an eye out for further products like it in the future. “Medusa’s Hunger” is an OSRIC™ compatible adventure for characters of levels 5-7. They take a straightforward quest but find themselves in the clutches of a medusa and her conniving mate. The adventurers have been invited to dinner, but what’s on the menu? 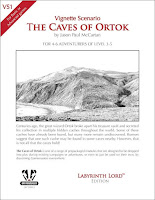 VS1 - The Caves of Ortok - Labyrinth Lord Edition - 2.99  2.00 - Centuries ago, the great wizard Ortok broke apart his treasure vault and secreted his collection in multiple hidden caches throughout the world. Some of these caches have already been found, but many more remain undiscovered. Rumors suggest that one such cache may be found in some caves nearby. However, that is not all that the caves hold! The Caves of Ortok is one of a range of prepackaged modules that are designed to be dropped into play during existing campaigns or adventures, or even to just be used on their own, by discerning Gamesmasters everywhere. 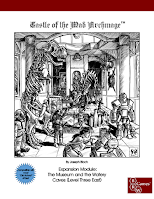 Castle of the Mad Archmage Expansion - Level Three East - 4.95  3.32 - Confound your players with a whole new level to add to your Castle of the Mad Archmage™ adventure. Level Three East describes the wonders of the Mad Archmage’s own museum, which contains curiosities and treasures from all over the multiverse, and the challenges of the Watery Caves, which are a series of living caves connected by an underground river. This module features 74 new encounter areas and 6 new monsters, a full two-page map, plus new magic items, new rumors, an explanation of how this module fits into the whole Castle structure, and the impact it will have on the inhabitants of the central third level of the dungeon. There are also tips for game masters who would like to run this level as a stand-alone adventure. Levels in the dungeon roughly comport to suitable character levels, to this module is best suited for PCs of approximately 3rd level. However, there are (intentionally) some encounters that only more powerful characters can expect to handle.