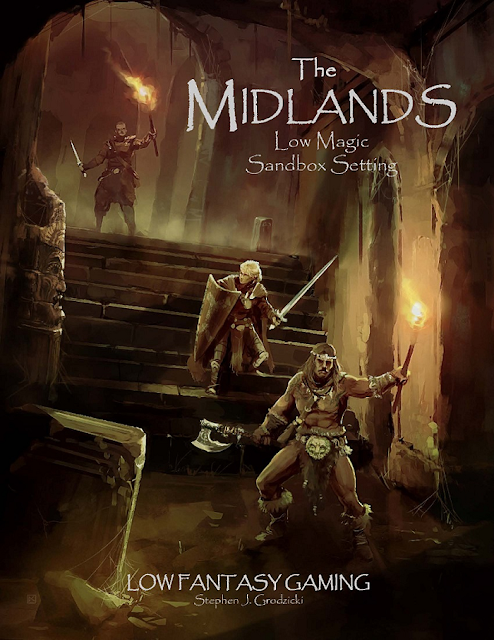 Sometimes all you want out of a setting is useability. Midlands is that and more. Normally 10 bucks in PDF, until tomorrow morning, Midlands Low Magic Sandbox Setting is a mere 5 bucks. (a huge thanks to a Tavern Regular for the heads up)

But what do you get? A setting, tools, and more!

The Midlands PDF (original version softcover/hardcover available via Lulu) is 365 pages of low magic, low prep, customisable sandbox, in a “points of light” medieval fantasy realm. The setting is written for the Low Fantasy Gaming RPG system, a d20 variant under the OGL, but is easily adapted to any fantasy RPG.

The Midlands is half setting, half DIY toolkit (per the Contents in the preview); filled with tables and tools to assist the GM to run an improvised sandbox, including fifty Adventure Frameworks to sprinkle around the region (mini adventures with enough meat to kickstart an adventure, but enough flexibility to expand/adapt to player choices).

The Midlands' main themes include:

Silent Gods - Deities are ineffably distant; offering no miracles, nor intervening in the world in any obvious way.

Hex Map - As of Feb 2019, a top down colour Midlands Hex Map (with and without labels) is separately available for $5 via DTRPG.