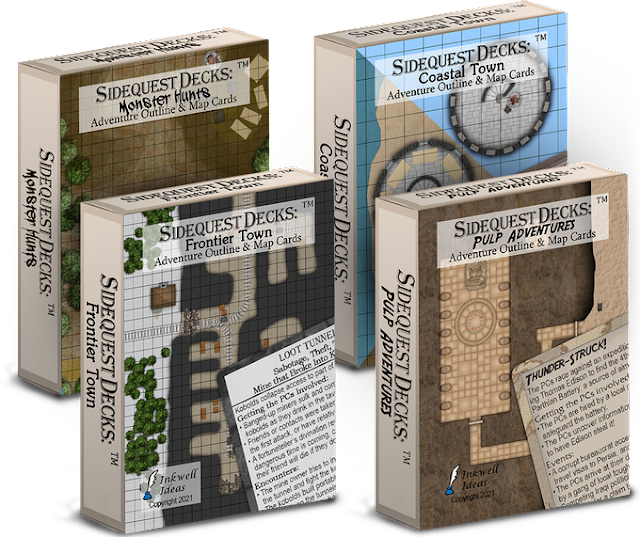 Every card is a mini-adventure! A map on one side, outline on the other: GM info, story hooks, encounter plot points, & follow-up ideas.

A few years ago, after I retired and well before The Year of the Pandemic, I was in a face-to-face gaming group out in Suffolk County, New York. We had been playing AD&D 1e for months (although it could have been for years as I joined late in the campaign). Our regular DM decided to take a break, and I was tasked with running the next campaign. The issue at hand was I did not know I was tasked with running the said campaign and had nothing prepared for the session. Ack!

I had the group take 10 minutes and I got to work. I pulled out a handy RPG Sidequest Deck from Inkwell that I had purchased prior and always carried in my Gaming GoTo Bag for just such an emergency. I quickly found a map that inspired me, made a few notes based on the short write-up on the card and did some fleshing out, broke out the Swords & Wizardry Light Rules, and we were rolling characters at the end of the prior promised 10 minutes. Three hours later we finished up a full and fulfilling gaming session.

I simply LOVE Inkwell's SideQuest Decks, and I'm happy to say I'm backing the RPG SideQuest Decks Kickstarter. A single deck is 12 bucks, 10 decks are 100 bucks. (I'll let you guess how many decks I'm backing for ;) Honestly, you can't go wrong, especially if you are a DM that likes to run games by the seat of your pants.

Sidequest Decks are system agnostic tabletop RPG plot outlines & maps. They  are perfect to pull out when your players unexpectedly take a casual  comment for a story hook and you need an adventure idea, or for planning  what dangers lurk in your kingdom. You may even chain several together for an entire campaign!

Each poker-sized card has a map on one side and a mini-adventure outline on the other side. The outline starts with a short description for the GM.  (Skim these to find an adventure that fits the circumstances.) Choose  between a couple of story hooks to get the adventure started. Next several encounter ideas move the game along. Customize them to match what your players do (drop some, change them to fit circumstances). Finally each card wraps up with one or two follow-up adventure ideas.

We've made 11 of these decks over the past few years, and now we're planning four more.