There is currently a SciFi Sale going on over at DriveThruRPG. Some discounts are as high as 33% (and much is lower than 33%). I'll be covering some Tavern Picks that are 33% off.

Hmmm, this may will take up multiple posts... 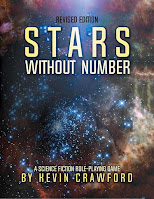 Stars Without Number: Revised Edition - is an old-school-inspired game of sci-fi adventure, one built from the ground up to encourage sandbox play and simplify a GM's job in providing it. Familiar mechanics are employed to forge new worlds and explore new possibilities, guidelines built on long experience used to help a group venture in wholly new directions. 20.00  13.39

ALIEN RPG Core Rulebook - Space is vast, dark, and not your friend. Gamma rays and neutrino bursts erupt from dying stars to cook you alive, black holes tear you apart, and the void itself boils your blood and seizes your brain. Try to scream and no one can hear you—hold your breath and you rupture your lungs. Space isn’t as empty as you’d think, either—its frontiers are ever-expanding. Rival governments wage a cold war of aggression while greedy corporations vie for valuable resources. Colonists reach for the stars and gamble with their lives—each new world tamed is either feast or famine.  24.99  16.74 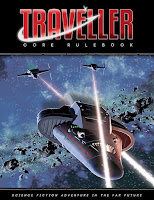 Traveller Core Rulebook -A brand new edition of Traveller is now available - based on the original but tweaked, finessed and updated through a massive months-long beta playtest by you, the players! Traveller is a science fiction roleplaying game of bold explorers and brave adventurers. The Traveller Core Rulebook contains everything you need to create one of these adventurers and begin exploring the galaxy. Spaceports, ancient civilisations, air/rafts, cold steel blades, laser carbines, far distant worlds, and exotic alien beasts – this is the futuristic universe of Traveller, the original and classic science fiction roleplaying game. 29.99  20.99
Shadowrun: Fifth Edition Core Rulebook (Master Index Edition) 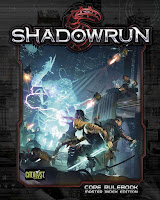 and Shadowrun, Sixth World Core Rulebook - can't decide which edition of Shadowrun to get? Get 'em both ;) - There are cracks in the world. They’re slender, dark, and often cold, but they are the only things that keep you hidden. Keep you alive. They are the shadows of the world, and they are where you live. You are a shadowrunner, thriving in the margins, doing the jobs no one else can. You have no office, no permanent home, no background to check. You are whatever you make 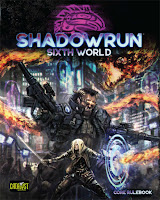 yourself. Will you seek justice? Sow seeds of chaos? Sell out to the highest bidder? It’s up to you, but this much is certain: If you do nothing, the streets will eat you alive. You can survive, even flourish, as long as you do what it takes. Sacrifice part of your soul for bleeding-edge gear. Push the limits of your will learning new and dangerous magic. Wire yourself into the Matrix, making your mind one with screaming streams of data. It’ll cost you something—everything does—but you can make it worth the price.
Either one - 19.99  13.39
The Tavern is supported by readers like you. The easiest way to support The Tavern is to shop via our affiliate links. DTRPG, Amazon, and Humble Bundle are affiliate programs that support The Tavern.  You can catch the daily Tavern Chat podcast on Anchor, YouTube,  or wherever you listen to your podcast collection. - Tenkar
Posted by Tenkar at 8:58 PM