Kickstarter - Corsairs of Cthulhu - A Call of Cthulhu® Campaign Book 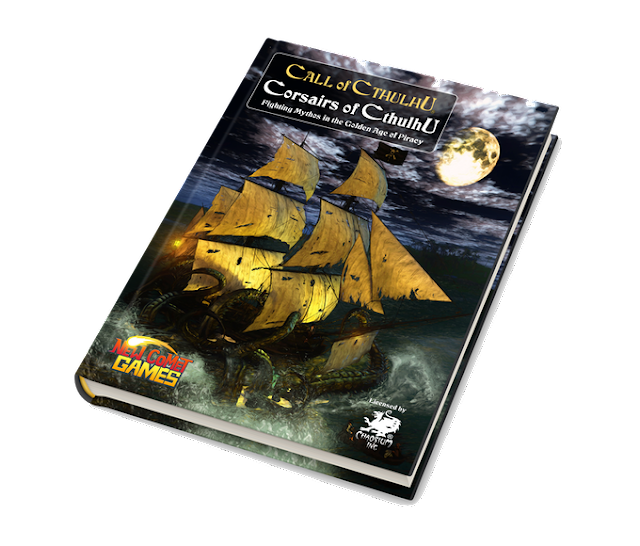 Fighting Mythos in the Golden Age of Piracy - A Call of Cthulhu Campaign book.

Call of Cthulhu is probably tied for my favorite rule system I'll likely never run again, the other being Paranoia 1st Edition from West End Games. Note, I didn't say I'll never play them again, as it is possible I'll find a convention game I could sign up for, but neither game fits well will my fellow circle of players.

Because neither seems to do campaigns very well, but as one-shots or story arcs, they thrive.

So what does New Comet Games decide to do? They offer a CoC campaign book in the age of piracy.

Corsairs of Cthulhu - A Call of Cthulhu® Campaign Book is a Kickstarter from New Comet Games.

Ben Burns, the man behind New Comet Games was the guest of Bad Mike & Myself on Talking Crit earlier tonight.

Corsairs of Cthulhu is a rules and setting supplement to the Call of Cthulhu role-playing game and focuses on the period between 1650 and 1730 CE. Your keeper can set up your investigators as crew on a pirate or privateer ship, freelancers in one of the Caribbean ports who love the gold doubloon more than a foreign governments rule, or even provide your investigators with their own ship. Working together the investigators must face evil Mythos, real and imagined. Curses left by ancient civilizations and hidden nightmares around the world.

The golden age of piracy is a time of spreading empires. England, France, Spain, Italy as well as several other smaller countries are planting their flags and colonies on any piece of land they can find. Empires rise and fall, Spanish ships are hauling new found gold from the new world back to Spain and ships are lost to pirates and storms regularly. Governments authorize privateers to sail under their flag but can raise the black when needed.

There are new skills, new professions, famous NPCs and new weapons that the investigators must learn to use if they want to survive against not only the dangers of the Mythos, but also against disease, dehydration, sea monsters, warships, and other pirates.