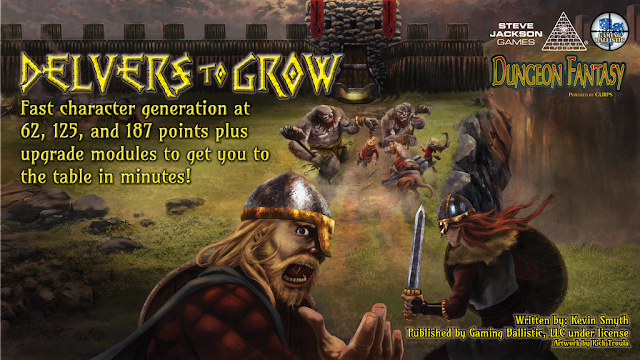 I've been a fan of GURPS from the time I found the Man to Man rules, along with the Orcslayer supplement. The only problem was that designing characters was always a pain in the ass as a player. As a DM, it is literally a compounded player. Still, the GURPS sourcebooks have always been a thing of beauty.

The other complaint I used to have is that GURPS never seems to do traditional fantasy tropes as one would expect from a D&D-type background. Sure, you had the Fantasy and Magic sourcebooks, but they seemed to lack flavor, unlike many of the other GURPS sourcebooks.

That is until Dungeon Fantasy was released. It literally was the GURPS rules with the D&D tropes that I have come to expect from a fantasy RPG, and my God, it does the genre well. Character generation of NPCs still sucked though, and become one of the intimidating factors that kept me from truly giving the Dungeon Fantasy rules a proper shake.

All this leads me to Douglas Coles' new Kickstarter, Delvers to Grow. Doug takes the most intimidating factor of GURPS, creating characters, and makes it easy as pie for the GM. No stress GURPS. Never thought I'd see the day. Of course, Doug is selling Delvers to Grow as a Player aid, but in my eyes, it's an amazing tool for the Dungeon Fantasy GM ;)

Even the mightiest delver started somewhere. An apprentice, a squire or man-at-arms, a backup singer with The Backstreet Bards.

Delvers to Grow allows you to take the part of those starting characters, supporting starting play as low as 62 points.  Delvers to Grow provides pre-built modules and packages enabling a player to create a capable, playable character in minutes.

Explore different challenges or use the modules to effortlessly assemble henchmen...or create a starting character to replace the dearly departed.