Deal of the Day - Pyramid of the Lost King (Swords & Wizardry) 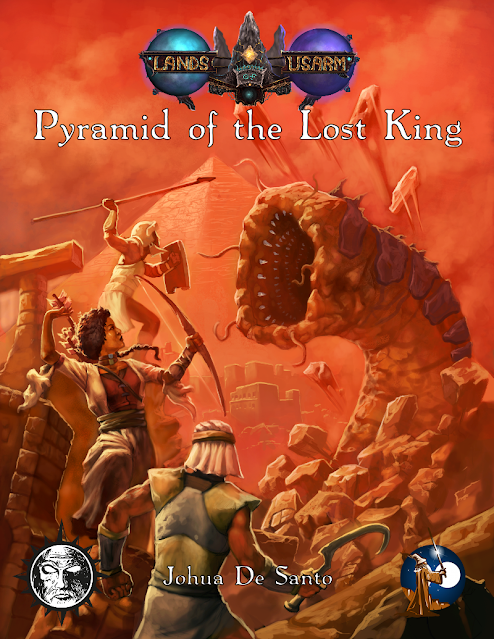 Today's Deal of the Day is Pyramid of the Lost King for Swords & Wizardry. I've owned this is PDF since it released and I am dying to run it, as it is as much setting as it is an adventure. There is a lot of meat on this bone, and it's in my wheelhouse, as it's geared to levels 1 to 5.

Normally 15 bucks in PDF, until tomorrow morning Pyramid of the Lost King is on sale for 7.50

Millions of year ago the lands of Usarm were devastated by a great Cataclysm in the final days of the war between the Gods of Usa’arm and the demonish threat of the N’zi. In the wake of a final assault by the Usa’arm the very fabric of reality was torn asunder flooding the world with arcane energies and rips that sundered other worlds and realities … and in the process sank Usarm into the dark depths of ruin.

Now, Usarm is home to races and monsters dragged through those rips; refugees who now call a world ravaged by magic home. Wars between some races is common, and a dark threat rises in the North and another in the far south. A south that until now was left unexplored by the peoples of Usarm.

Intrigued by the prospect of riches the Merchants Guilds of Newrk stretch their arms and money into the great southern desert of the Saragubi hoping to find new peoples and new cultures to trade with and to grow more wealthy by.

Pyramid of the Lost King is designed for play with Frog God Games Swords & Wizardry and can be enjoyed by characters of the first to five level and is as much a campaign as it is an adventure. Within this book lay the trade city of Basq, the Rift Bridge, the Saragubi Desert, and hours of adventure for all who are foolhardy enough to venture into the Desert.

edit: I was reminded there was a guest review for this from back in 2018:

Email ThisBlogThis!Share to TwitterShare to FacebookShare to Pinterest
Labels: deal of the day, OSR, Swords and Wizardry