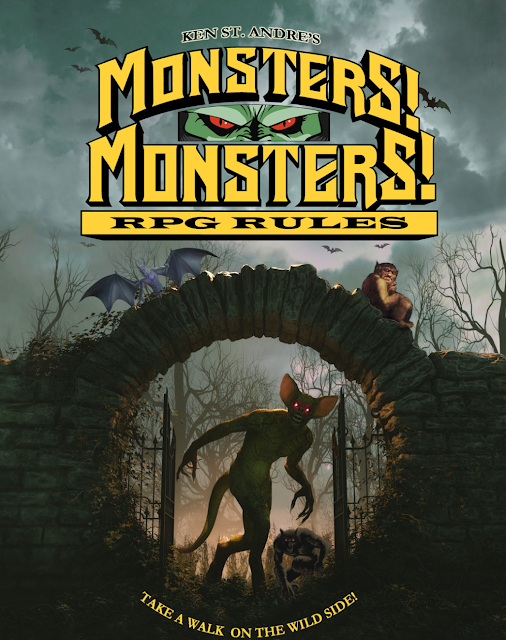 I'm not one to do much in the way of reviews, even though many have and still do ask me to do so. The reasons are quite simple, as I feel many others do a far better job at reviewing products than I ever could and I don't take pleasure in reviewing (let alone reading) releases that I'm not enjoying. So, for the most part, I leave reviews in the hands of others, although I do post often about new releases that spark my interest.

The Second Edition of Monsters! Monsters! was released in June of 2020, and technically is not a "new release." Quite simply, I knew it had released, I had my copy in print and PDF and I never got around to reading through it until earlier today. So, technically, it's new to me ;)

First things first, the art is damn good. The cover is awesome and the interior art reminds me of Games Workshop / White Dwarf artwork from the 80s and it fits the atmosphere perfectly.

Ruleswise, you can see the influence of later editions of Tunnels &Trolls on this edition of Monsters! Monsters! We get spite damage from T&T 5.5, stunting, and a new optional rule - Chaos Factor. Chaos factor has a huge potential to skew the power level of the game in favor of the players, but that isn't necessarily bad, just something to be aware of. You get 5 Fast Start Kindreds (and 49 altogether), so your choices as a player cover a large potential of concepts. 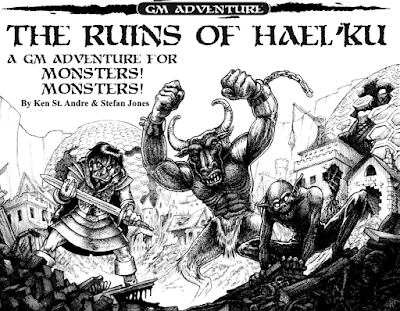 Still, the rules are Tunnels &Trolls rules. If you play T&T, you'll find inspiration within. The enclosed GM Adventure (not quite as rare as a unicorn in T&T, but certainly uncommon) is part setting with a large helping of adventure and adventure leads. The Ruins of Hael'Ku can be used for Monsters! Monsters! or Tunnels & Trolls, and should work well with either system - or both.

Monsters! Monsters! is 9.95 in PDF, which I think is a very fair value for what you get, especially if you are a fan of the Tunnels & Trolls rules.

T
he Tavern is supported by readers like you. The easiest way to support The Tavern is to shop via our affiliate links. DTRPG, Amazon, and Humble Bundle are affiliate programs that support The Tavern.
You can catch the daily Tavern Chat podcast on Anchor, YouTube,
or wherever you listen to your podcast collection.
Posted by Tenkar at 3:37 PM