ZineQuest 3 - Scrap Rats enter The Lair of the Manticore and find Anarchy!

ZineQuest 3 is possibly the easiest way to spend money on Kickstarter. It's one-stop shopping of gaming goodness in small packages that will fill my mailbox throughout the year. Christmas in July & December? Screw that - I want that special feeling of opening gifts of gaming goodness all of the time ;)

Scrap Rats - Zak Goins - A zero level sci-fi RPG that uses the D&D 5th edition rules as its engine, then jettisons all of the bloat? I think I'm in love :) Catch the Fireside Chat and watch me swoon ;) 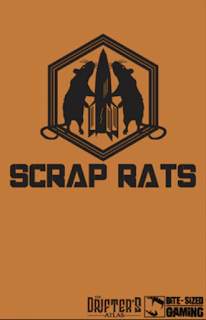 There's a lot of different game types and themes you'll be able to draw from during play, but here's where we think Scrap Rats excels:

Horror|Thriller // Playing as level-0 characters, there are a plethora of things that can kill your party. Heck, even a feral cat can mess you up if things sour quickly. Putting your players up against something that can surely spell their doom is a great way to incite panic and make for a memorable session.

Suspense // Level-0 salvagers aren't exactly "skilled", but they do possess a certain set of skills. Sometimes it’ll require quick thinking and an out-of-the-box mindset to survive. There can be many times in your party’s career that they’re faced with “do or die” situations.

Pulpy Action // Not everything has to be dour. Some can be raucous, ridiculous good fun. Of course it’ll also be dangerous, but that’s just part of living!

Comedy // If your table is anything like ours, this one hardly needs to be said. Any time a group gets together, hijinks may ensue. The over-the-top artifacts and bizarre denizens can become excellent fodder for the confetti cannon.

Anarchy! - James Carpio - Sometimes you just need to let your hair down, or spike it up or shave it off. Anarchy! appears to be that kind of game. Somewhere in heaven, Joey Ramone is rolling some dice... Watch the Fireside Chat 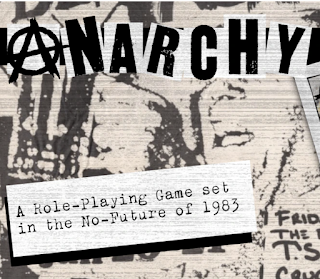 Oi! It’s the year 1983, and the world is gone! Well gone… You see, the big three (Reagan, Brezhnev, and Thatcher) decided that it was a great fucking idea to start poking bombs at each other, and then BOOM! One day in October, it all goes to shite! It was nothing like that late-night movie said it would be. The radiation brought about something they call Dark Mana; it was worse than anything we could imagine. You think a bunch of yuppie fascists were bad when they were swilling imported beer, try imbuing them with dark magic, then all hell breaks loose, literally!

Now they try to rebuild their capitalistic utopias with fanatical cults, CEO demons, and a well-armed police state trying to oppress our music and freedoms. Well, not if we can help it! The underground is alive and fighting back. We have also gathered the power of this dark corruption to throw it back in their faces. They call us the Anarchists, those of us who have sworn to fight the power in a whole new way. They may have the armies of the damned at their side, but we fight back with our music, courage, and anarchy!

The Lair of the Manticore - Frank Tufler - An adventure, a mini-setting, and fantastical diseases? This is an example of why I blew through my $250 ZineQuest 3 budget and haven't even looked back. Good stuff! 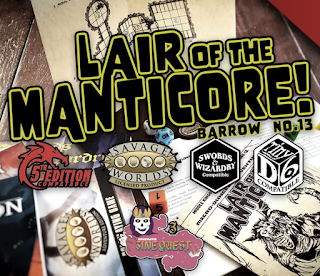 "Lair of the Manticore!" began as a free black and white map designed as an adventure starter for a short one-page adventure. It has since grown and expanded to 24 pages and continues to grow.

It still retains the charm of a one-page adventure and is designed to be quick and easy to run with very little prep, but now includes a mini-setting, the Keep on the Barrow Lands, and some new challenges for players, such as The Dark Flower Sickness which also includes optional disease rules.

I'll be back with more ZineQuest picks on Monday - as well as two ZineQuest Livestreams on Monday and two more on Tuesday. Seriously, subscribe to YouTube.com/ErikTenkar so you don't miss any of them :)

You can catch the daily Tavern Chat podcast on Anchor, YouTube,
or wherever you listen to your podcast collection.
Posted by Tenkar at 6:31 PM