And we are back to ZineQuest! 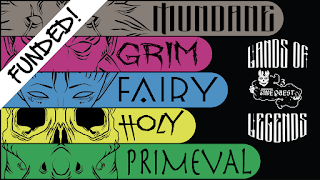 Lands of Legends - SIX Zines for #ZineQuest3 - An OSR toolkit in SIX zines to spark your fantasy sandbox with 500 unique areas and 500 special encounters, in five different flavors! I think I was hooked at "OSR toolkit" :) Seriously, Giuseppe Rotondo gave me a peek behind the veil, or rather, a sneak peek of Lands of Legends and I was, and still am, duly impressed. If you like running sandboxes, hex crawls, or need some inspiration for the setting you are prepping, you really can't go wrong with the Lands of Legend Kickstarter - Tenkar

I'm backing at the POD plus PDF level :)

Lands of Legends is a collection of five zines, each of which is a unique tool to craft and enrich your fantasy sandbox and adventures with unique areas, locales, encounters, and events.

And it's SIX zines, actually: thanks to the awesome community that is backing our project, Lands of Legends now is a set of SIX zines! See the Catch-Up Goals below to find out what the sixth zine is about!

It can be used with most fantasy RPGs, and occasionally refers to the basic concepts of the world's most popular role-playing game (things like Armor Class, Hit Dice, and so on), so it is readily usable with the vast majority of OSR rulesets. 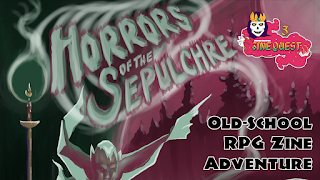 Horrors of the Sepulchre - An old-school RPG zine adventure - Steve C (short for Canadian perhaps), Matt (The Humble Mapper) Jackson and Del (I actually own some of your original artwork before you became huge) Tiegler have combined to put together a new "Tomb of Horrors" for lower levels. Yep, you can abuse your party before they can abuse you ;) Tenkar

Horrors of the Sepulchre is an old-school RPG zine adventure created in the tradition of the classic module Tomb of Horrors, but it's made for the B/X "sweet spot" of player character levels 4-7.

So what does Horrors of the Sepulchre have within its evil pages?

But you mentioned THAT module above. Is there even any hope of survival?

Of course there is! Be smart about it. This is OLD-SCHOOL, you gotta step up your game! Horrors of the Sepulchre gives you the glorious opportunity to take on a deathtrap dungeon with menacing monsters and substantial reward.

Are you daring enough? Or are you gonna slink back to Ye Olde Tavern in town like some pansy-ass bard and sing grand tales of what OTHER adventurers do? 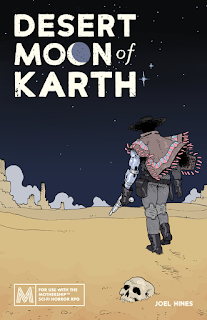 Desert Moon of Karth - A space western sandbox on a tiny moon for Mothership RPG. Harvest the ossified corpses of coral beings and live forever - I'm a huge fan of westerns & SciFi, and even wrote some stuff for White Star that was heavily influenced by Firefly & Spaghetti Westerns. So, offering a space western sandbox is right up my alley, and yet another addition to the Zines of ZineQuest 3 that I've added as notches to my belt - Tenkar

Saturday, 2/13/21 I'll be doing a Livestream with Joel Hines. Join us at YouTube.com/ErikTenkar

Karth is a tiny mesa studded moon on the galaxy's edge. The only way down is an antique space elevator to the lawless boomtown of Larstown; a place surrounded by even greater danger and strangeness in the wastes beyond. Survival or salvation is not guaranteed, partner.

You can catch the daily Tavern Chat podcast on Anchor, YouTube,
or wherever you listen to your podcast collection.
Posted by Tenkar at 3:49 PM