Some Personal Experience with one of the KenzerCo D-Team 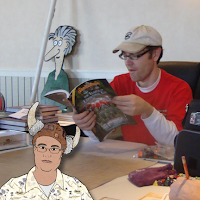 If you've been reading my ramblings here at the Tavern for the last couple of months you've got to have learned by now that I was a fig HackMaster player and used to volunteer for the folks over at KenzerCo.

I really considered the D-Team (Development Team) at KenzerCo as friends and when you're doing things for friends, working conventions and doing all the extra stuff I did really didn't feel like "work"....until it did and unfortunately that soured things for me. I could easily blame KenzerCo and if I layed everything out some of you may very well do so as well, but I clearly have to shoulder some of that blame not matter what.

I really try not to live with regrets and be accepting of the past that I cannot change, but one regret I have comes with souring my relationship with Steve Johannson, one of the D-Team. I'm not 100%, but I'm pretty sure Stevil from Knights of the Dinner Table was based on Steve Johannson and even though I think the character is an asshole, I lovingly called Steve "Stevil". This Stevil was also a character and could easily come across as an asshole, but in reality he was a great guy who had some awesomely epic rants. You'd be talking to him about something and BAM!, he'd go off on some long tirade sounding like Grandpa Simpson, but without (much) malice.\

One time when visiting the KenzerCo office, which was a hole-in-the wall small warehouse with a conference room and some odd office space (most of the guys worked from home 90% of the time), we we talking about printed modules and I mentioned I had a couple older ones that were in good shape except for some highlighting I had made. Stevil started just going off on how pristine printed adventure modules were an abomination.....an affront to gaming in general. Adventures were meant to be used and abused, dog-eared, and marked-up......basically giving up their "lives" in creating a great gaming session and memories that will last a lifetime.

For all the years volunteering for KenzerCo and with personal visits, etc., I actually had limited gaming experience with the D-Team. I wrote a tongue-in-cheek adventure for GMs at Origins one year and Stevil bellied up to an otherwise full table to play. Instead of playing an "appropriate" PC and overbalancing that table he decided to run a NPC torchbearer....a halfling IIRC. Now I was too busy GMing another table, but I remember seeing Stevil sitting on the floor, barely able to look over the table, his hand held high as he asks one of the PC's, "Do you have enough light?" At another Origins I actually got to play in a Roll-n-Run adventure (you quick roll up 1st level PCs and go on an adventure). Stevil rolled up a Magic User, which is usually considered a bit of a waste for this type of game. Since this was HackMaster 5th Edition you could (at an expensive cost) have your Magic User take a pole-arm for a weapon. For the rest of the game Stevil's Mage loved the spell he called "Cast Spear", which was of course just him using the spear like a really shitty 1st level Fighter. I also got to play at his table at GaryCon (2013) during a Sunday morning pickup game. We ran a few encounters out of the Temple of Existential Evil......I remember enjoying the game, but since it was Sunday morning at a Con...details will be lacking. I do remember the group had a barbarian so poor he had nothing but his weapon....yep, running around "adventuring" nekkid. To throw the guy a bone Stevil threw in as "loot" some nasty, used underwear just so the barbarian wouldn't be completely naked. 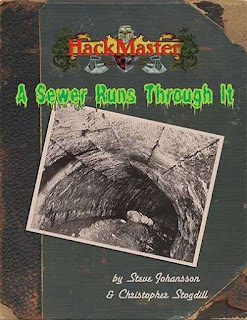 Well actually I did play in another of Stevil's games at GaryCon. He had a rough shell of an adventure seed that he ran a group of us through and towards the end of the adventure my Halfling Cleric saved the life of another PC using a particular spell. When that happened Stevil just freakin lit up and he had to stop and tell the rest of the D-Team what I had just done. These guys play together on the regular and when they wrote the new edition they pretty much all thought the spell I had used was pretty much useless and he/they were surprised to see if actually used for once, much less that it worked! After the game Stevil approached me with the idea of me writing/fleshing out the adventure and then he could edit it. Evidently he had the idea, but not the time to do the leg-work. I was elated at the opportunity to write a "real" adventure and went so far as to churn out a map, add art, and even do the cover. There was a drowning mechanic I wrote up, as the adventure required one. Stevil had a better mechanic and had to do some reformatting, but the adventure ended up largely as I wrote it. He even kept the title and cover (but he did change the font for the authors on the cover, which is the only change I didn't care for).

Unfortunately this was our only collaboration because initially I wasn't reimbursed for my work and since I was unemployed, taking a few days "off" to do unpaid work wasn't something I could afford to do. I HIGHLY suspect that in the end Stevil gave me $100 out of his own pocket to pay me for that adventure. I'm not really playing HackMaster anymore (but would like to!) and now that I have a good paying job I could afford to flesh-out more of Steve's ideas......

.....but unfortunately Steve passed away a year ago this weekend. Yes, I intentionally "buried the lead" (pun NOT intended, although I think he'd like that one), but I've been thinking of Steve lately and miss him more than I expected to. His "hands" were intimately involved in so much of my favorite gaming memories, basically anything involving HackMaster or Knights of the Dinner Table.

I appreciate getting the opportunity to share this here and hopefully someone here will tear off that shrink wrap on some saved adventure and start making some notes in the margins in preparation of running their home group in a dice-slinging session. You can always bag it and protect it for use again in the future.......

Posted by Christopher Stogdill at 1:18 PM