There is just over a week left on the Frog God Games PDF Sale over at DriveThruRPG. While nearly everything for 5e, Pathfinder, Swords & Wizardry, and more are on sale, I'm going to highlight some Swords & Wizardry relevant picks (and one Pathfinder pick that is just a HUGE bargain) 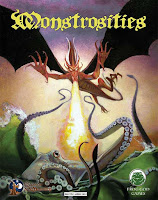 Monstrosities - NOW 7.50 - Probably THEE monster book in the OSR, each entry has an adventure hook.

You can never have too many monsters, and this book is filled with them! No matter what kind of campaign, there are foes galore to stock its wildernesses and dungeons, even the unknown depths of its mysterious oceans. This is a compendium that contains the monsters from the rulebook and many monsters from the First Edition of the original roleplaying game, but there are hundreds and hundreds of completely new beasts. Note: this is a second printing of the original Swords & Wizardry monster book, updated with errata and hundreds of illustrations. 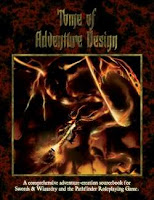 Tome of Adventure Design - NOW 6.30 - My go-to book for inspiration when I'm looking to design a new adventure.

The Tome of Adventure Design is organized as a series of "books," each one providing resources at every step of the way. The vast majority of the content of each book is made up of random generation tables that we created over a quarter of a century (sigh) for our own use. It shoud be said up front that these are tables for deep design - in other words, most of them are too long, and contain too many unusual or contradictory entries, for use on the spot at the gaming table. There are already many excellent books of tables for use on the fly; the tables in these books are different. They work best as a tool for preparation beforehand, providing relatively vast creative resources for browsing and gathering, rather than quick-use tables designed to provide broad, fast brushstrokes. Our shorter tables tend to d - eliver cryptic results designed to shock the reader's creativity into filling in the gaps, whereas the longer tables are unusably vast for easy random generation, being designed to shock the reader's creativity into operation by presenting a sea of possibilities. 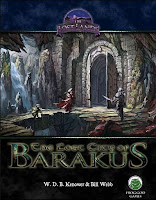 The Lost City of Barakus, designed to take characters from 1st to 5th or 6th level (or higher), is as much of a campaign setting as an adventure. Detailed within these pages is the great, bustling metropolis of Endhome, the Penprie Forest and Duskmoon Hills located north of that city, and, finally, the huge dungeon that is the Lost City of Barakus. Within all these areas are many adventures, NPCs, and locations for the party to explore, interact with and conquer. How and in what order the party chooses to take on the various challenges before them is entirely yours (the GM’s) and the players’ choice. 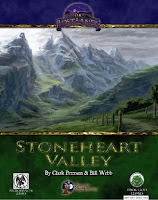 Finally, welcome to the World of Necromancer Games! From Bill Webb and Clark Peterson's home campaign comes the old-school setting of The Lost Lands: Stoneheart Valley. For over a decade, fans of Necromancer Games and Frog God Games have been asking to see the world behind the adventures. And at long last, here is where it all began, in the Stoneheart Valley near the town of Fairhill. This mini-campaign was originally presented to the fans of Necromancer Games in three separate modules: "The Wizard's Amulet", "The Crucible of Freya", and "The Tomb of Abysthor". Frog God Games has taken the full series from the 3E version plus supplemental material previously available only online, and converted it all to the Pathfinder Roleplaying Game system and the Swords & Wizardry Complete ruleset. 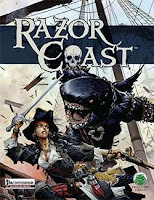 Razor Coast (PF) - NOW 3.00 - Yes, the Pathfinder version is far cheaper than the S&W version. My God but this was a fun read. Three bucks? Snag it!

Razor Coast is the long anticipated Caribe-Polynesian flavored, Age of Sail swashbuckling RPG campaign envisioned and designed by Nicolas Logue. It is applauded for its ambitious and original design, its epic flavor and its lurid, full-color art – including a cover by the award winning Wayne Reynolds. Logue tapped a team of veteran designers to help develop and write Razor Coast, including Lou Agresta, Adam Daigle, Tim Hitchcock, and John Ling.

This fun little tome is a GM utility for use during regular play when either too many good things happen to the players due to luck or just whenever the GM feels they need a little push to remind them that success is fleeting.

Dirty tricks are intended to create great players. That is and should be the only reason a GM springs such things on them. It also has the effect of creating a great game, where even mundane tasks cannot be taken for granted, and boredom is rare.