My Non-Thoughts on "Combat Wheelchair" Minis

OK, I realize that this is probably more rant territory than anything, but yesterday I came across this article about WotC, well specifically WotC staff, chiming in on the "Combat Wheelchair".

My initial reaction was, "WTF, is this actually a thing?"

No, not the wheelchair mini....I could give a rat's-ass about Tiefling minis in the first place. That's there's one on a wheelchair is even more a non-issue for me.

What fucking blows my mind is that someone, well anyone really, cares enough about a wheelchair mini to bitch and gripe about it to the extent that anyone, much less WotC staff, has to come and make a statement (in defense or otherwise) over the mini.

Seriously guys, and probably not you, but the whiners.....do you not get that it is a game?! You don't want a wheel-chair bound Tiefling...then don't play one! If having one in the group is that big of a deal to you then bring it up in the group and guess what......you might be looking for a new gaming group, but if you're that hung up on the issue that were you really in the right group to begin with?

I take it this is the mini in question: 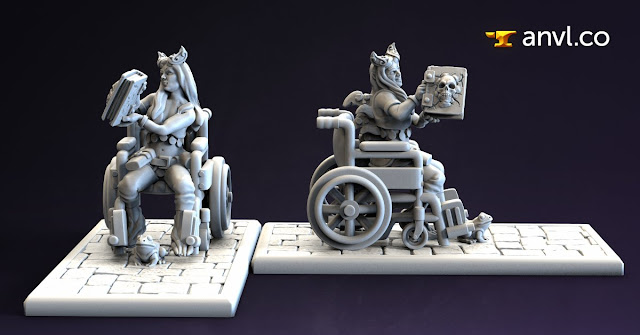 Please don't read into me on this.....I'm not some Social Justice Warrior championing the cause of diversity and inclusion at the gaming table. I've got my own biases, judgements, and can be just as big of a dick as the next guy.........but at some point you have to be an adult and realize it's your job in life to figure out what's important/not important and make the appropriate call......and that call isn't to go online and piss and moan.

You don't like the mini, great......again, don't buy it. I won't buy it because I have no use for it....even if it wasn't a Tiefling. Would I turn down a player wanting to use it for their PC?.....yes, but again only because it's a Tielfing. If this was a Dwarf, go for it. Like any other aspect of your PC I reserve the right to use the wheelchair against you. Don't expect me to suddenly make dungeons accessible or anything, but you know creatures/humanoids are fricken lazy so aside from stairs between levels a wheelchair would probably be more useful than initially imagined, but good luck escaping those pit traps!

Also, as an aside.....don't give me too much to work with as I'll use anything you give me against you if I can!

You don't have to be inclusive or have a diverse group at your gaming table, but maybe....and I'm going out on a limb here...you don't need to be a dick about it. It is just a game and there's a lot of out-of-game stuff that really matter, until it does. I don't know about disabilities, but I've had players with lifestyles (and religions!) I don't agree with.....that might not be the right way of putting it.....I generally don't care what you do in your off time as long as innocents aren't harmed...except Furries...they just (figuratively) rub me the wrong way, but that's my problem to work on.

I have been in a gaming group where I definitely did not agree with the GM's lifestyle. Again, I generally don't care, but too much "downtime" around the table consisted of discussions I really did NOT want to have to listen to. I wouldn't want to hear about my best-friend's sex life at the gaming table, and I might find that interesting, so someone else's.....no thanks. I stuck with the game for a while......and I would like to say that I mentioned my discomfort to the GM, but it was years ago....doesn't matter now. Clearly this was just "my" issue, so I just stopped playing. It was a good game & GM otherwise, but it was a big enough issue to stop playing. I'm self-aware enough to know that I probably wasn't as mature and adult about the whole situation as I should have been, I am human after all, but I learned from it and I did not go online to piss and moan about the situation that really only affected me. I did not expect the world to change to make me feel more comfortable and I definitely did not act like a big enough douche that KenzerCo (it was a HackMaster game I was playing) felt like they had make some public statement.

Clearly I'm not anyone special here, not claiming to be, but I have a soap-box and really when/if you guys reading this happen upon this level of self-entitled whining trying to force someone else to needlessly play RPGs "their way".....shut that shit down....

.....unless it's about Furries or Tieflings, fuck those guys*.

*Lighten up Francis......I'm kidding, clearly, but there should probably be some very minor variances made for edition-preferences.

Posted by Christopher Stogdill at 2:13 AM

Email ThisBlogThis!Share to TwitterShare to FacebookShare to Pinterest
Labels: minis, not Erik, rantish