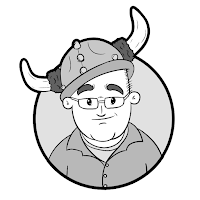 Erik should be home today from the hospital, but I'm off work early today and thought I'd use the Tavern soapbox to shill for myself, something I thought fellow Tavern-goers (do we collectively have name?) might be interested in:

I know, I know.....it's probably bad form to have one post with where I name-drop Ken Whitman (or is it Whit Whitman now?) and then the next day mention a different Kickstarter...... 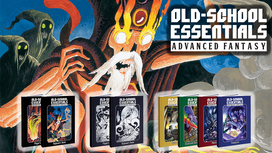 I cannot do much about that now, if Erik has a problem he'll either cut me off at the bar, or.......heaven forbid, ask me to settle my bar tab. I think I'm good because the folks over at Necrotic Gnome have actually come through on their 1st Kickstarter for Old School Essentials, which was a B/X Clone.

Just a couple weeks ago I got my copy of the OSE Classic Fantasy Rules Tome.....and it is sooooooo droolworthy. Holy crap is it nice! Now I don't want to talk shit about other B/X games/sets, but I really only want to play with my OSE book now. It is one of them there "fancy" European sized books, I don't know A5 maybe.......ugh, I feel a little less 'Merican for even knowing that, but whatever. The book is beautiful, sturdy, and full of gorgeous little touches.

When I found out that Necrotic Gnome was doing another Kickstarter to add-in some "Advanced Fantasy" supplements...I bought in ASAP. Since the Kickstarter has just under two weeks left as of the time of this post I figured I'd clue some of you in.

You know that OSE Classic Fantasy Rules Tome I was just gushing over? Yeah, i just learned it's on sale over at Necrotic Gnome's Website......for a lot less than I paid for it. With the quick Euro-conversion I just did I think it's $41 plus shipping.......

......oh, wait a minute....that's if you're one of those European-type folks that natively gets what an A5 sized book is. Those guys get it on sale for more than haf-off. We can get it for $40 through Exhalted Funeral, and it's the same price what I paid for.....guess I got a little too exited....must have been thinking of the gobs of money I spent on other gaming stuff recently (got a bunch of 3d printing stuff and filled some holes in my comics collection).

If you didn't already have the Classic (B/X) Fantasy Rules Tome already, but were interested I think I'd probably just buy in to the Kickstarter and grab everything you wanted all at once and get a huge present to yourself, but that's more to see if you can shave a few bucks off of shipping.

A lot of us here at the Tavern love the OSR and this is just a pretty new flavor of OSR that I happen to enjoy right now. Love it or leave it.....your choice, but better to have the choice than to miss out....right?

Posted by Christopher Stogdill at 2:10 PM

Email ThisBlogThis!Share to TwitterShare to FacebookShare to Pinterest
Labels: kickstarter, not Erik, OSR