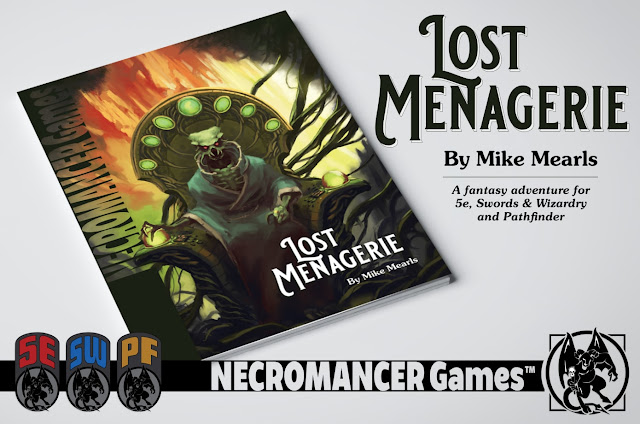 This is the perfect tie for small, inexpensive crowdfunding projects. Lost Menagerie is from Necromancer Games - 8 bucks in PDF, 22 bucks in print plus PDF. Available in 5e, Pathfinder and Swords & Wizardry versions.

Lost Menagerie is a challenging adventure for characters of 7th to 9th level*, written by Mike Mearls, one of the two Lead Designers of Fifth Edition Dungeons & Dragons.

In the distant past, the great wizard Arfaleo the Seeker claimed favors from four mighty elemental lords to create a self-contained world. The wizard populated his microcosm with strange creatures, to monitor what changes might occur to them over time, even bringing a small settlement of humans into the interplanar cavern. Eventually, though, the wizard’s interest in his experiment waned and he moved on, leaving behind the bizarre anomaly he had created.

Since this time, the microcosm has changed in many ways, for it did not remain isolated from other planes of existence. New creatures have made their way into the wizard’s carefully-maintained experiment, and — there is no other way to say it — things have gone very wrong.

*For Swords & Wizardry, the module is for characters level 6-8.

COVID-19 Effect: The printing for this adventure is done by a family-owned shop in Arizona, where a shelter-in-place order is in effect, making us one of their largest customers. Sales like this also allow us to keep a stream of income moving to our freelance artists, authors, layout artists, and editors during the shut-downs. Frog God will come out of this crisis intact, so this isn't a "keep the doors open" plea, but we want to let you know that your purchase is one that you can feel comfortable about. It directly affects small businesses and households. We hope that all of you remain safe and well for the duration!