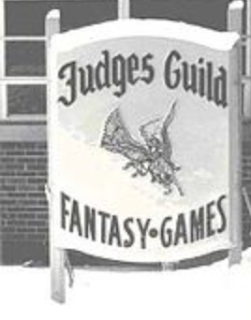 FYI, Judges Guild is no longer available for sale at DrveThruRPG. I have not seen an official announcement from OneBookShelf nor Judges Guild explaining why the products were removed.

NTRPG Con That I even have to make a public statement about this is uncomfortable. But I have been contacted by a few regular attendees asking about Bob Bledsaw Jr. and the statements that came to light this week on his social media pages. No, he will not be asked back to the con nor allowed to attend. While Doug and I foster an inclusive environment, believe in free speech, and champion gaming with all other gamers over political litmus tests, this is a step too far. Bob's statements weren't another political view. They were the kind of statements that show extreme ignorance at best and promulgation of evil at worst. Doug and I both were shocked by Bob's comments and taken by surprise....we've talked with him for years and never had a clue. In fact in person he seemed like a nice guy. We never suspected he held opinions and beliefs that are antithesis to what brings us to the gaming table to share adventures and companionship at cons, nor that he would state them so publicly. Stated bluntly, if you have views like Bobs and feel the need to share them socially, please don’t attend NTRPG con.

Doug and I aren't looking for kudos or backpats for this, this is pretty much Being a Human 101. If you want to thank us, please spread the word that Judges Guild products and Bob Bledsaw Sr shouldn't be held responsible for Bob Jrs words, and people should continue to enjoy the great gaming products JG gave us over the years. Good people like Jennell Jaquays and Paul Elkmann own some of their own JG material they worked on and shouldn't have to suffer guilt by association. Support them and other creators like Robert Conley who have contributed to the mythos over the years. And thanks for attending the con for 11 years and trusting us enough to provide a safe enough con that you share this experience with your kids and sometimes grandkids. Gaming is something that brings us together, in good and bad times, and we love seeing all of you every year. Be safe and be good to each other. Michael Badoloto - NTRPG https://www.facebook.com/groups/310434204630/

The Secrets of Blackmoor Team Due to recent events that have come to our attention, there will be changes in the Tonisborg Dungeon book.

We had initially reached out to Bob Bledsaw and Judges Guild to partner on the book via artwork and branding. At the time, we wanted to ally ourselves with a company and artist that would help boost visibility to Blackmoor fans. We also felt the book should be in the same category as Dave Arneson's First Fantasy Campaign, which was produced by Judges Guild way back in 1977. However, due to a series of entirely unacceptable comments made by Bob Bledsaw Jr. and Bob Bledsaw III on social media, we can't continue a business relationship with the Bledsaw family or Judges Guild.

We are still very much dedicated to producing the Tonisborg Dungeon book. The manuscript is full of fun OSR material for new and old referees, and the dungeon itself deserves to be in print for everyone to enjoy. To this end, we will be dropping the Judges Guild name from the publication and replace the Bledsaw artwork with works by other artists before going to press.

Additionally, we are aware that we've delayed delivery on your Kickstarter rewards way too long. On our end, it's been an issue of trying to cut shipping costs and waiting with crossed fingers for everything made by our vendors to arrive. We're just going to cut to the chase today and ship what we have (DVD's, Blu rays, T-shirts, and Dice Bags).
We want to hear from you, our backers, on how you feel about the changes to the Tonisborg book. Please respond here, or send us a message privately.
Thank you, The Secrets of Blackmoor Team https://www.kickstarter.com/projects/secretsofblackmoor/secrets-of-blackmoor-the-true-history-of-dungeons/posts/2756098

Frog God Games Recently the owner of Judges Guild made a series of racist and anti-semitic posts on Facebook. We will not reproduce them here; they are shown on Rob Conley's Bat in the Attic blog, and we are convinced of their authenticity. Rob wrote his post because, as a licensee of Judges Guild property, he felt he needed to state clearly that he would not be doing business with Judges Guild in the future. We have also licensed property from Judges Guild in the past, and we are seconding Rob's example by cutting off all future business with Judges Guild. The posts made on Facebook were completely unacceptable.     https://www.facebook.com/frog.god.games/

Bat in the Attic - Rob Conley Concerning Judges Guild
I use facebook to keep in contact with various individuals including Robert Bledsaw II, the owner of the Judges Guild IP and the son of one of the company's founders.
Saturday evening, I noticed the following post: 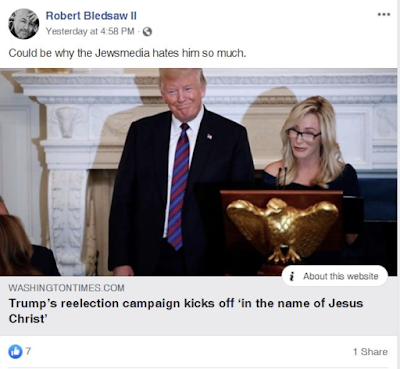 Read the caption above the picture to see the issue. This is unacceptable.

Sunday evening, I called Robert Bledsaw II and discussed the issue. I notified him that I will no longer be doing future Judges' Guild projects and will only continue to sell what I have currently listed.  I stated that I will be calling the other Judges Guild licensee and inform them of the situation and of my decision.

I was not planning making any public announcements. Given the mob mentality I have seen emerge, I was not comfortable in making a public statement.

However, because I was calling several people who are immediately affected by this situation, the odds of a public post were high. With issues like these, one has to follow the dictates of their conscience. It has gone public hence this post explaining what happened and why. 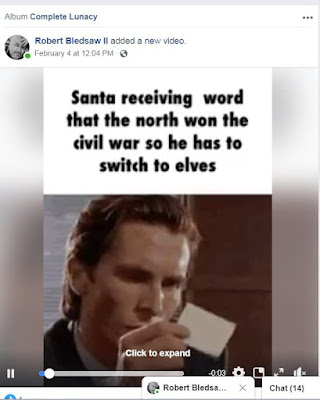 The video is of Christian Bale dropping the card and looking disappointed.

This cemented my decision that I can no longer be in a future business relationship with Judges Guild. Then later this post was pointed out to me: 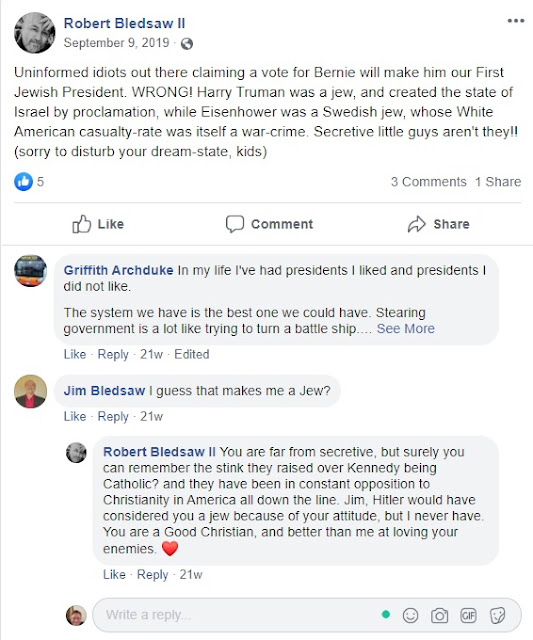 This too, I consider unacceptable.

For now, I will keep up my Judges Guild related products up for sale. I currently have a unique situation in regards to the royalties I pay. Given the state of the Kickstarter finances, Robert Bledsaw II suspended the royalty payments in lieu of paying me for finishing the last nine maps. This has been going on since November of 2017 when I released the CSIO map. Since then, all revenue after taxes and expenses have gone to me. This will not last indefinitely, at which point I will have to revisit having these products listed based on how things have progressed. I will make an announcement accordingly.

Expect a post outlining my future plans for Bat in the Attic Games. In a nutshell, I wasn't expecting to have a license to Judges Guild IP ten years ago and was proceeding on that basis for what became the Majestic Wilderlands supplement. Then an opportunity came up after I finished working on the map for City State of the Sea Kings, and as a result I secured a license.

Last Word
To those of you familiar with my published writing: I try to follow a philosophy of less is more. So is it the same in the case of my response. I don't need to explain the ills caused by generations of bigotry and prejudice. It is just wrong, and it is unacceptable.
http://batintheattic.blogspot.com/2020/02/concerning-judges-guild.html