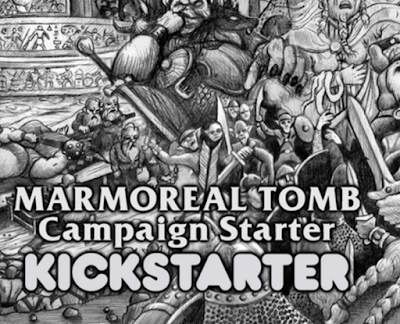 I shared this last night on the Tavern Chat Podcast but it deserves to be shared on the blogside too. The reason the Marmoreal Tomb Kickstarter was "White Knighted" by Troll Lord Games is that the bulk of the funds raised by the Kickstarter are still in the bank. Otherwise, it would likely have been financially infeasible to save.  As far as the City-State of the Invincible Overlord Kickstarter goes, there ISN'T ANYTHING left in the bank. Troll Lord Games is basically taking on the role of a project manager for the Marmoreal Tomb. CSIO needs someone to donate funds, possibly more than was raised in the first place.

It’s been roughly a week of looking at what goes into the Marmoreal Tomb Kickstarter. As noted in the previous update, my primary objective at the moment is to get a good handle on the status of the material offered in pledge levels and stretch rewards and the overall financial health of the Kickstarter. So without further ado….

The status of the main book is my primary concern. I’m working toward getting a copy of that to see  exactly what remains to be done.  Benoist and I have set up a drop box and he’ll start moving files over shortly. When I have a better handle on the main book, I’ll let you know. The expansions are in a similar state. I am working toward getting copies of what has been done on those as well.

Financially the Kickstarter is very healthy. Ernie has kept the money in an account all this time, ready to pay for things as needed. Though I did not request an expense report, I can estimate the cost of much that goes into these books and things look good on that front. I’ll know more as we go forward, but overall this looks good.

We are going to try to make sure all pledge offerings and stretch rewards are honored. There will be some that have to be changed. In those cases (and we have two already, see below), we will endeavor to replace the stretch reward with something else. We will, of course, keep you in in the loop about any changes. Speaking of changes….

The first one up is the cartoon by Tom Wham. Tom’s a good friend of mine, we’ve worked together on multiple projects, but he’s stepped back from active game design and cartooning these days and doesn’t feel up to taking on any more work. We will replace Tom’s cartoon with a cartoonist we work with, Jason Walton. Jason does our Christmas card every year, hosts of covers and interiors. Though he does not have the old school credentials as Tom does, he’s exceptionally good. See the bottom of this update for two samples of what he has done for us in the past.

The cartographer who was working on the maps has since moved on. Benoist is sending me the level that was completed so that I can get a hold of one of the cartographers we work with, to get these maps wrapped up. We will strive to maintain the style and feel already established. Also, when I get that map, I’ll post it for you all to see. (He sent me some material through facebook but I want to get it in drop box where I can manage it better).

That’s all I have for now. I will try to do weekly updates, even when there is no change. I can't promise that however, as time seems to fly by here in the Dens, but we will try.
Benoist and Ernie both are very excited to have us helping out and I hope it is affording them enough mental relief to get the finals done and to us.

As a last note, don't hesitate to reach out with comments or messages. If you see I am missing something or something needs addressed please let us know.

Thank you all and have a wonderful weekend.
Steve Chenault

Hey all, my update of this morning had some misinformation about the maps. It was pointed out to me in the comments on the update and  thank you all for doing that. Please remember I'm a new comer to this Kickstarter and still have lots of catching up to do. Any information you can provide is appreciated.

So in the earlier update I told you that the maps were not complete and that we may have to find a new cartographer. That is incorrect. The maps are complete, aside from final adjustments Benoist may have to make as he finishes the text (adding the symbol for a secret door, changing a room number and so on). But that aside, the maps are ready to go.

What is not ready to go are the duplicate set of miniatures-sized maps with a resolution high enough to be printed at 5 feet per inch. The first level was completed; the others were not.

Also, we are looking at moving this project to Backerkit sooner rather than later. That will help us get a handle on the numbers, especially for those of you who had add-ons; we need to have a proper count on certain things to know how much to manufacture.

Thank you all and my apologies for the confusion.
Stephen Chenault