Yep, there's a Halloween Sale over at DriveThruRPG with a large number of titles at 25% off. If you want to go to a specifically OSR listing of for-sale products, you can go to this link: OSR Halloween.

Don't forget to click on all the Jack-o-lanterns, as they lead to free stuff. There is one on the main sale page. 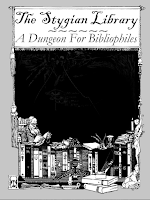 The Stygian Library - The Stygian Library is a creepily genteel dungeon set in an infinite extradimensional library. Each expodition generates its route as it explores, resulting in new locations being iscovered with every visit. Included within: Systems for generating locations within the library, including Entrance Foyers, Map Galleries, Tea Rooms,  Planetariums, Calculation Engines, Phantom Databanks, Paper Beehives, Phantom Pumps, Jarred Brains and the Sheol Computer. 40 monsters tailored to the Library, including Lantern Bearers, Skeleton Crew, Origami Golems, Guardian Shades, Lost Souls, Ink Elementals, Animate Spells, Archivist-Liches, Infernal Merchants, Escaped Fictions, Educated Rodents, Conceptual Wells and the orders of Librarians themselves. A system for searching for specific knowledge within the library's depths, as well as 30 unusual books and the secret knowledge they contain.Tables for generating treasure, dreams, rumors, and various other useful details. A unique class of Mummified Sages, post-human academics who've dwelled in the Library for decades or more. It's a big spooky library full of dangerous knowledge, spiritual automata, and ghost-fueled computers.  5.00  3.75 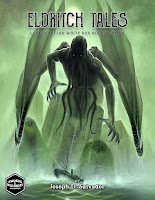 Eldritch Tales: Lovecraftian White Box Role-Playing - Aeons before man arose from the primordial mire, ancient creatures descended from the stars or stepped through dimensional passages to inhabit the Earth. Whilst many of these Old Ones have since passed into inactivity, the secrets they carried with them have been shared with man and now terrible cults haunt the fringes of modern society. These ancient terrors thus still menace mankind and, if the prophecies are to be believed, the Old Ones shall return to reign again over the Earth! Eldritch Tales: Lovecraftian White Box Role-Playing in an OSR rule set with its roots in the Original version of the world's favorite RPG, but instead of exploring musty dungeons, characters in Eldritch Tales investigate Mythos horrors in the 1920s! The setting and background are based on the cosmic horror tales of Howard Phillips Lovecraft and other members of his writing circle. Within the pages of Eldritch Tales you will find four character classes representing many classic pulp archetypes, occupations, rules for insanity, spells, monsters, esoteric tomes, artifacts, a starting scenario, and setting material, as well as advice on using Eldritch Tales with other White Box games. This game is compatible with Swords & Wizardry White Box and other OSR games. To accommodate all devices, the PDF purchase includes versions in both high resolution and low resolution. PDF has a bookmarked Table of Contents, as well as linked terms throughout the book.  6.99  5.24

DARK PLACES & DEMOGORGONS - Survive This!! - Core Rule Book - Following in the tradition of SURVIVE THIS!! Zombies! comes SURVIVE THIS!! Dark Places & Demogorgons, a tabletop roleplaying game that uses the Original 1970s Fantasy Roleplaying game rules but mutates it into this retro nightmare. It’s sleek, slender and creepy as Hell. In Dark Places & Demogorgons, you play as high school students during the early 1980s. The town you live in has had a rash of disappearances and strange happenings. The adults seem lost as what to do, the police are as clueless as ever and aren’t helping and Reverend Phillips is on another witch-hunt. It’s up to you and your friends to figure out what’s going on and stop it from happening again!  4.99  3.74

SURVIVE THIS!! Zombies! 2nd Edition - Core Rule Book -STZ-2E is an OSR RPG with modern sensibilities, utilizing the time tested rules of the old-school and fusing them seamlessly with modern mechanics and game design principals to give you a fast, fun and dangerous, thrill ride-like gaming experience. “They’re coming to get you Barbara . . .”That’s the line that started it all. Sure, there were other zombies in movies and literature prior to the delivery of that iconic quote but George A. Romero’s Night of The Living Dead kicked off the modern zombie craze. From Day of the Dead to Return of the Living Dead to Dawn of the Dead to Shaun of the Dead to The Walking Dead, people can’t get enough of The Dead! Zombies can be found in abundance in film, TV, comic books, literature, video games, board games, card games, dice games and yes, of course, roleplaying games. That is where we come in. SURVIVE THIS!! – Zombies! was the first in the line of SURVIVE THIS!! Roleplaying Games to be released by indy publisher, Bloat Games. Dark Places & Demogorgons, the second game released under the SURVIVE THIS!! banner, brought about several updates and additions to the game rules and mechanics, which brings us now to the reason for the 2nd Edition of SURVIVE THIS!! Zombies!  We wanted to not only bring STZ up to date with the changes found in Dark Places & Demogorgons but also saw an opportunity to include the additions of Backgrounds, Skills, 6 New Classes, updated Savings Throws, Out of Action Table, Usage Die, Random Encounter Table, Adventure Hooks table as well as all the additional Zombies and Classes from the PDF only Supplement: SURVIVE THIS!! Zombies! Welcome to Zombie Land.  4.99  3.74 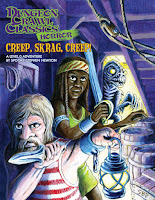 Dungeon Crawl Classics Horror #5: Creep, Skrag, Creep! - A level 0 funnel adventure for DCC RPG – specially themed for horror! The ship is adrift and a crew is dead. When the passengers of the Star of Nostro awaken, drugged and bound, and discover the crew is missing, a desperate race for survival begins. The vessel was meant to transport your group of humble villagers to a brighter future. It is now a coffin ship filled with mysterious deaths, dark plots, and a stalking horror that will not stop until it has feasted on every last soul.  Will your characters’ ingenuity be quick enough to find a means to survive, or will you too fall victim to what creeps in the shadows?  6.99  5.24


There are affiliate links above. Affiliate links keep the beer cold and the taps flowing at The Tavern. Thank you :)
Posted by Tenkar at 8:22 PM