"Was hoping for an interview. This reads more like an infomercial. That criticism aside, I do like hearing from the creators of TTRPG products and do want to encourage more of these articles. I would just hope that they are more substantial."

Thus goes the first comment on the ENWorld article titled: Matthew Sprange, Mongoose Publishing, Discusses Traveller and Paranoia. The thing is, he doesn't really. At least, not in the normal sense. There is no interview. There aren't even quotes. It almost feels like a happenstance sit down at a bar, where you try and cobble together some memories of the conversation the next morning while fighting a hangover. Oh, and a quick google search of everything said company published to flesh it out.

"This is really an infomercial piece for Mongoose and not anything else. I am quite disappointed."

Ah yes, it does read like that. But have no worries, no sir! This article was paid for an supported by the ENWorld Patreon! Your donations at work. You DO donate, right?

"I would love to have seen an actual transcript of the conversation."

As would I. If one existed, I expect we would have been reading that instead.

"While I wouldn't go so far as to call this an infomercial, I agree with the other commenters that this would be a lot more interesting if it was a full transcribed interview (ENWORLD: "Tell me about your games" MATTHEW: "Okay, I will now talk about a game"). Or at least if it had full quotes from Matthew mixed with text, like a newspaper article ("This game is coming out. Matthew says "This game is awesome"). Sorry, it just doesn't read well like this."

Remember when ENWorld WAS publishing paid for advertisements - er, articles? Here's a link from 2016 - How Much Actual "RPG News" is There to Report?

"It reminds me of what you might get in high school when the teacher says "Please submit a 1 to 2 page report on the topic of your choice. Please interview someone as part of your research." Also hard to pin down whether this was a quick review of Mathew or of current and future Mongoose products."

So, the Patreon has been in existence at least since 2016. How successful is it? 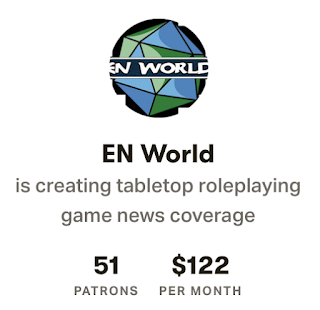 Assuming it pays for an article a day, it pays about 4 bucks a published piece. I guess you really do get what you pay for.

I will give credit where credit due. Not only is this article still up (it was published Thursday, July 11th - Today is Sunday, July 14th) but the comments are still up too and no one from ENWorld has tried to defend it. It's almost like they don't care.

Email ThisBlogThis!Share to TwitterShare to FacebookShare to Pinterest
Labels: EnWorld