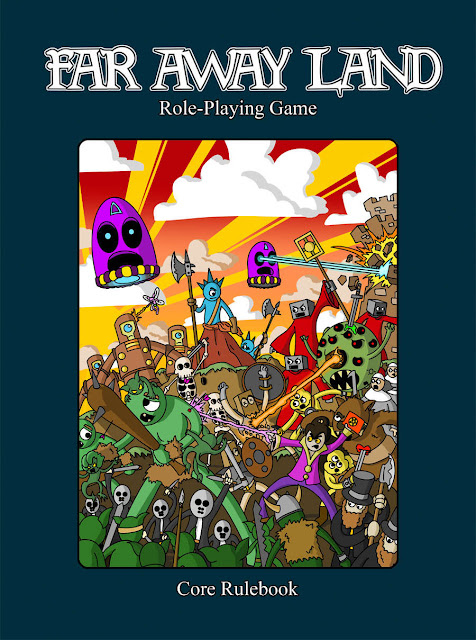 I must note, I wrote one of the two Forwards in Far Away Land OSR RPG: Core Rules (the other writer was none other than Matt Finch). I've was in the loop fairly early in the project, and was blessed with an early prerelease version of the rules. Suffice to say, they are good.


Remember what it felt like to open a book when you were a kid and be mesmerized by what was inside? This was our goal in creating the Far Away Land OSR RPG. Far Away Land is weird. Far Away Land is colorful and quirky and super imaginative. Did we mention its really fun too?

Far Away Land (FAL) OSR is a re-imagining of the Far Away Land RPG – through the lens of OSR-style games and mechanics. This project was inspired by Swords and Wizardry Light, a stripped-down, rules-lite version of Swords and Wizardry that uses only d20s and d6s. FAL was originally inspired by simple, old school gaming mechanics that place emphasis on characters, story, and adventures rather than heavy rules. This version of FAL uses familiar mechanics (6 stats, HP, AC, etc.) mashed into the Far Away Land setting. It maintains the tradition of a rules-lite game while using a more well-known system that is compatible with the world’s most famous rpg and many of its clones. Essentially, FAL OSR is a complete circle, back to what initially inspired the original game, set in the gonzo world of Far Away Land. So, while the rules have changed to be compatible with other systems, the unique world of FAL is the same.

Yep, those are affiliate links above. Affiliate links keep the lights on and the beers cold here at The Tavern. I appreciate all of the support.