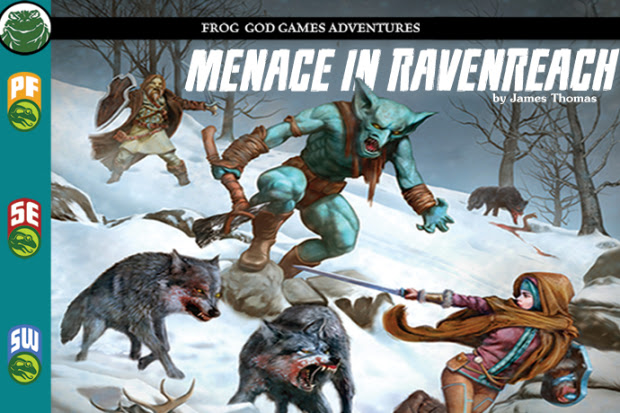 I've really been enjoying the recent Frog God Games releases on Indiegogo. Sall and relatively inexpensive compared to the larger, hardcover releases. Menace in Ravenreach looks to be another solid release.


When the group of adventurers arrived in the outpost town of Ravenreach they headed directly to the local tavern. As was usual, it took under the hour until fists started flying, glassware shattering and furniture flying. The fighting ended, just as the last of the locals melted away.

Their incarceration made the wanderers the ideal candidates for an unusual errand. The Master Minder, the court wizard, requires the capture of a local troll  – alive – for his studies.  Without hesitation they accepted the task and into the wilds they went.
Not exactly start to a Saga of old, but the days are young as they slip into the dark woods.


Menace in Ravenreach by James Thomas- available in Fifth Edition, Pathfinder or Swords & Wizardry versions, is an adventure for mid-level characters. We expect this will be the only only time we offer the premium softcover version for sale.

Within its covers (or the digital PDF file) you will find:
Menace in Ravenreach is 17 bucks plus shipping for the Print plus PDF and is available in Swords & Wizardry, Pathfinder and 5e flavors. 6 bucks for the PDF. Did I mention it launched a few hours ago and is already hitting stretch goals.
Posted by Tenkar at 5:31 PM