Deal of the Day - The Sentinel Chapel (DragonQuest / The Fantasy Trip) 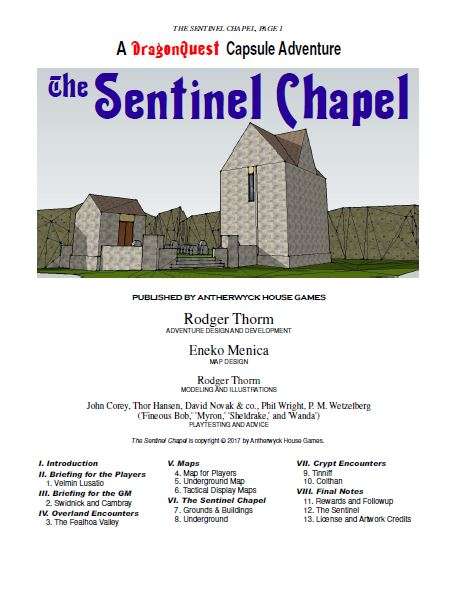 Todays Deal of the Day is The Sentinel Chapel for DragonQuest, with a conversion sheet for The Fantasy Trip and easily converted to most any fantasy RPG. Sure, I'm late with this post but I had a busy day ;)


A DragonQuest adventure for 3-6 adventurer-level characters.

Late in the year, as the harvest season is closing, and towns and villages are preparing for the coming winter, word has reached the group that someone is looking for a small band of adventurers for a dangerous, but well-paying task. They are to travel into the Fealhoa Valley, a region that has been deadly dangerous for the past 30 years, when it became overrun with monsters and undead creatures. A village called Cambray, several days' travel into the Fealhoa Valley has been cut off, and no one has been in contact with that community for many years.

The adventurers are to travel to the site of a chapel located about a day's travel from the town of Cambray and recover the silver letters on the family graves of a group of silversmiths who were originally from Cambray, and whose remaining family members now live in exile.

Although this adventure has been designed and written for the DragonQuest role-playing game, it can be easily translated for use with other game systems. The GM will need to make the necessary interpolations beforehand in order to do this.

For use with The Fantasy Trip (Melee, Wizard, In the Labyrinth), there is a free PDF conversion sheet that provides stats and descriptions for the adventure for use with that game system.

Email ThisBlogThis!Share to TwitterShare to FacebookShare to Pinterest
Labels: deal of the day, DragonQuest