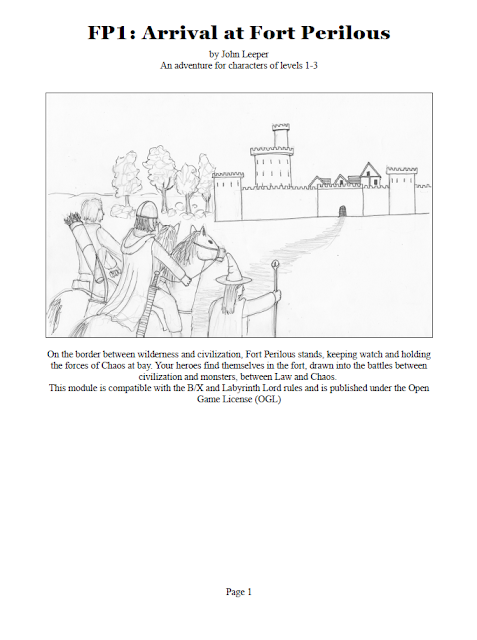 I was contacted by the author (and artist) of FP1: Arrival at Fort Perilous and asked if I would take a look at it. I have and although it has some minor flaws (some inconsistencies in the layout - and I should know, as I am piss poor at doing layout) it looks to be well worth the asking price of 2.20


This is an old-school sandbox adventure for the basic version of the world's most popular fantasy RPG. Explore the wilderness and the three detailed dungeons around the human outpost of Fort Perilous.

On the border between wilderness and civilization, Fort Perilous stands, keeping watch and holding the forces of Chaos at bay. Your heroes find themselves in the fort, drawn into the battles between civilization and monsters, between Law and Chaos.

This module is primarily a sandbox setting – that is players and GMs are not required to stick to any particular storyline. It is loosely along the same lines as the classic B2: The Keep on the Borderlands where there is a base where adventurers can rest, heal and sell loot.

Beyond the fort there is an area of borderlands that contains a number of locations of interest to adventurers (see chapter 2). Four of these are detailed in subsequent chapters though others are only briefly mentioned and can be fleshed out by GMs if they so wish.


So, what do you get for the price of a slice of pizza?  Sandbox, a couple of dungeons, a safe (relatively) starting location for the PCs and some new cleric spells.

Do you have the quality of a Frog God module? No, but you don't have that price tag either. If you simply want bang for your adventuring buck, I don't think you can do much better than Arrival at Fort Perilous at $2.20 in PDF.