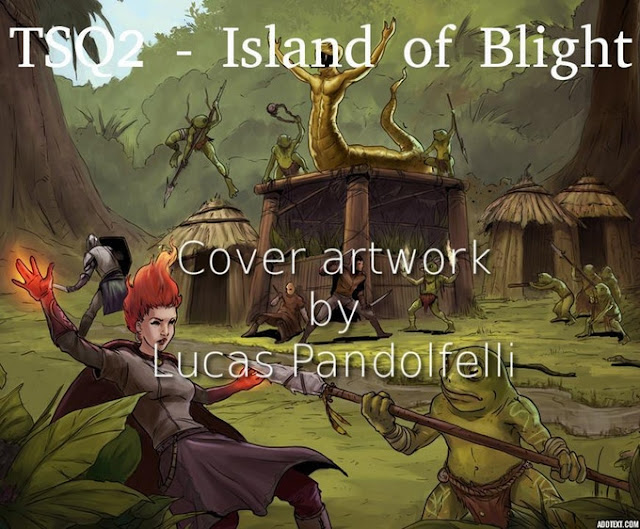 For those following along at home, your bartender is still under the weather. Additionally, my niece has progressed to an ear infection. As misery loves company, I'll be engaging in uncle duties later this morning. If I am slow to respond to emails and messages, I hope you'll understand why.

Today we are highlighting the Island of Blight, A Multi-System Fantasy RPG Adventure Kickstarter from Throwi Games / Thom Wilson. Thom was the organizer of ShireCon last month and is a skilled and prolific creator of RPG material.

So, what is the Island of Blight?


The Red Priests of the Snake God suffered a crushing blow to their plans when they failed to take the small town of Thuil. Reeling from their defeat, they have returned to the deep jungles of Nolgur-Wul to regroup. The human villages outside the jungles know that it is only a matter of time before the Red Priests and their minions return. Now is the time to take the fight to them, deep within the jungles! The characters are urged to delve into the depths of Nolgur-Wul to track the Red Priests back to their clandestine temple where it is said a serpent queen, maiden of the Snake God himself, leads the growing cult. On the trail of the fleeing Red Priests, the adventurers find that a mysterious blight has recently begun to destroy the western jungles, villages, and all life within. What starts as a quick investigation becomes an unusual and deadly puzzle. More importantly, is this blight the Snake God's doing or something completely separate?

A moderately challenging adventure for three to five players, Island of Blight can be played using OSRIC, 5E, and SRS.  Written by Thom Wilson of ThrowiGames, edited by Michael J. Gross, III.

Now, why do I back Thom's projects BEFORE even reading the pitch?


The writing, cartography, and illustrations are already complete! I like to complete as much as possible *before* I start a Kickstarter project, so you get your rewards after payments process and the books are printed. No waiting. No excuses.

The book is 100% written and has already been play-tested.

Pretty much what is left is editing and layout. THIS is awesome! All that and Thom has a tried and test track record.

I'm in for 35 bucks - Isle of Blight and In Defense of Thuil - both in print (the first signed). I'm fairly sure I already have Defense of Thuil, but if I do, one copy will probably sneak into one of the OSR Christmas boxes.

Overseas? Short on cash? Six bucks gets you both books in PDF. THAT is a fucking steal!
Posted by Tenkar at 9:31 AM