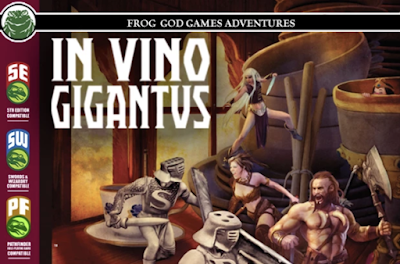 I apologize for the past few days. I've been fighting one hell of a chest cold (and serving uncle duties for my similarly suffering niece) and I've been lagging behind. Today I am trying to play catch up, but as I'm still under the weather I make no guarantees.

In Vino Gigantus is the latest Indiegogo release from Frog God Games. It is written by James Spahn. Let me get this out of the way, so there are no questions later - I work closely with The Frogs (I am listed on their site as "Convention Manager") and James is a close, dear friend that is actually better defined as family. I am open about my predispositions and prejudices.

All that being said, The Frogs produce consistently great releases. If there is a complaint, it's regarding the high prices of their hardcover releases. Thus, their Indiegogo line of shorter, softcover releases. In Vino Gigantus is their second release in the series.

This is your chance own the premium* softcover of In Vino Gigantus the newest adventure from Frog God Games! Available for Fifth Edition, Swords & Wizardry and the Pathfinder Role-Playing Game System, this will be the first, and likely only, printing of In Vino Gigantus. This softcover is as nice as can possibly make it using a specialty print shop that is proven to deliver a variety of specialty glossy booklets for major luxury name-brand clients (and, well less well-known luxury brands like Frog God Games.) In Vino Gigantus will be delivered to you on the best high-gloss paper showing off the most exciting and vivid color art afforded us by the supporters of this Project.

*expected to be between 20-24 pages with high-gloss 100 lb interior paper with card stock cover. All Softcover options include the matching PDF file and other unlocked digital extras (Player Map, New Creature Tokens, etc) which may not be in the softcover or available to PDF customers in the future.

6 bucks for the PDF. Print plus PDF is 16 bucks plus shipping.


Stormridge Sanctum was once home to the the an ancient and noble line of storm giants. It floated miles beyond the sight of mortal men, witnessing the birth and death of countless civilizations. But as time wore on and decadence laid hold to the Tempestas clan, both Stormridge Sanctum and its magnificent liege lords surrendered to the decay of time and decadence.

Now a single storm giant noble remains, the haughty dilettante sorcerer-prince Clovis Tempestas II. He concerns himself only with base pleasures and none more so than his beloved stock of family wine. But his beloved wine cellar has become flooded with a foul murk and strange creatures slither between bottles of his finest family vintage. He cannot be bothered to wade into such filth himself and he has no servants remaining in his household, so he has used what little magic his grape-addled mind can recall and summoned new servants: A troupe of unsuspecting adventures who will serve -- and if necessary, die -- to save his beloved wine.

This introductory adventure can be instantly inserted into any campaign without preamble, as it opens with the player characters being the unwitting targets of a Summon Monster spell! Once summoned into the very hands of a mad and drunken giant, the player characters will find themselves exploring a realm designed for creatures ten times their size as they fight all manner of strange creature, traverse larger than life obstacles and objects, encounter other adventurers who have fallen into the clutches of the mad prince Tempestas, and even risk plummeting to their death as the very foundation of the cloud castle of Stormridge Sanctum is crumbling beneath their boots!

Can the player characters placate the whims of a giant drunk on power and lost grace? Will they survive encounters with the strange animated objects that have become twisted by decades of neglected magic beneath a crumbling castle? And just what the hell is that echoing boom coming from the eastern part of the wine cellar?!

You’ve been granted the hospitality of the storm giant prince Clovis Tempestas II, and he’s always up for a little more...