Kindle Books -The Adventures of Fafhrd and the Gray Mouser: Swords and Deviltry, Swords Against Death, and Swords in the Mist - 3.99 for the Set 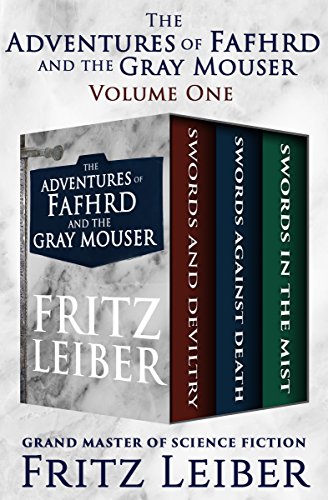 A tip of the hat to Joe K over at The Tavern's Facebook Community for bringing this to my attention.

The Adventures of Fafhrd and the Grey Mouser: Swords and Deviltry, Swords Against Death, and Swords in the Mist is $3.99 for the set.

I really hope Fafhrd and the Gray Mouser need no introduction, but if they do:

Swords and Deviltry: Fafhrd, a handsome barbarian of the Steppes, is seduced by a beautiful prostitute and her equally intoxicating city, while the Gray Mouser, a slum rat wizard-in-training, is tempted by the dark arts. The two men meet on a night of multiple thieveries and an enduring partnership is born.

Swords Against Death: Rogue swordsmen and devoted companions Fafhrd and the Gray Mouser pursue ill-gotten fortunes within the confines of Lankhmar. They cross paths with two wizards, Sheelba of the Eyeless Face and Ningauble of the Seven Eyes, and a most violent clash ensues. Eventually, following further adventures, the two antiheroes end up as indentured swordsman servants to their former foes.

Swords in the Mist: A cloud of concentrated hatred and lean times in Lankhmar compels Fafhrd and the Gray Mouser to temporarily depart the most corrupt metropolis in all of Nehwon as they seek adventure in the realm of the Sea-King—and on a different world entirely.