Hey Taverners, it's James Spahn. You know me. The White Star/White Box guy. The dude with a strange obsession with Halflings and Squirrels. The dude who's been running around the OSR for the past half-decade or so trying to write a few fun games.

Well, I recently released Untold Adventures: Minimalist Fantasy Roleplaying. I'm ridiculously proud of my little game and hope you'll grab a copy over on RPGNow when you get a chance. It won't cost you anything. Heck, the PDF is Pay-What-You-Want and will always remain so. 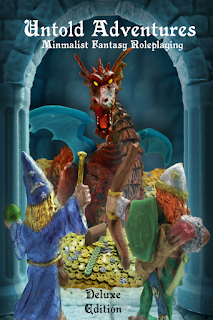 To that end, I've also created a Google Plus Community for Untold Adventures. Give it a join as I talk with other fans of the game and post little tweaks and options for the system. Heck, there's already a post about modifying ENnie winner Glynn Seal's Midderlands Expanded for use with Untold Adventures - because Midderlands is awesome.

In addition, I wanted to give a shout to anyone who was interested. I thought it would be fun to do a supplement for Untold Adventures as a community. A compilation of short dungeon-crawl adventures using the freely available commercial-use maps by Dyson Logos. The book would tentatively be titled Undiscovered Dungeons and the PDF would be released for free on OBS, with the a softcover print version made available at-cost via Lulu. Basically, each contributor would select a small map and write do a dungeon write-up no longer than 3000 words. Just enough for a night or two of adventure.

I'm not looking to make a dime off Undiscovered Dungeons, just to get together with my fellow OSR fans and make a fun companion to Untold Adventures. If this is something you'd be interested in, leave a comment on this thread over on the UA G+ Community.

Thanks for your time and consideration.