#ConManKen Comes Clean - He IS the Biggest Loser 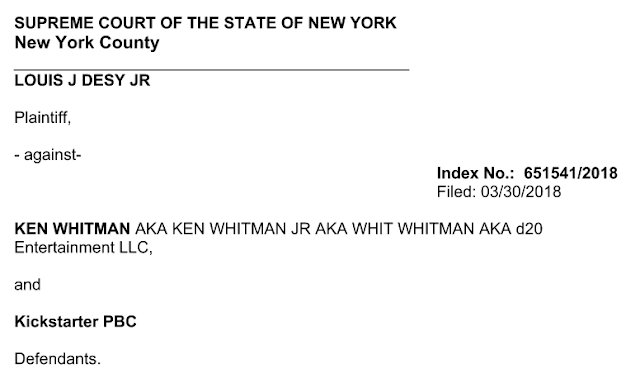 When all you do is lie, when you suddenly come clean and tell the truth, it's almost too incredible to believe. Yet the evidence is clear, Ken Whitman lost / misplaced / broke two 4 TB hard drives that contained KotDT: LAS and possibly other videos from other Kickstarters BEFORE Gen Con 2015 and the KotDT Release Party.

The attempted shakedown of Kenzer Co for an extension to Ken's contract at the end of 2017 in return for the HD video? All bluster. There WAS no video. It was already gone.

The court case is basically done. There is nothing to be recovered.

Huge thanks to Louis Desy - without you, we'd never have closure. Without you, Kenny would still be lying.

From Louis Desy (highlighting is me):


If we assume that Whitman is lying about the files being gone, but no one can get him to tell them what he wants to turn the raw footage over, none of anything going on makes sense.

BUT once we realize that Whitman is telling the truth to some people at times about the files being gone, then everything he has done and is doing makes perfect sense.
It also explains why no matter what I did over the months, including offers of money, I could never get Whitman to name a price or say what he wanted to turn over the raw footage. Why? Because if Whitman named a price, and I said OK, and sent ZOE to make the transfer, it would have been discovered that Whitman had been lying about having the raw footage and lying to make it look like he was holding it hostage.

It is also why Whitman only told me late yesterday afternoon the number of devices and what happened to each. Whitman figures, as I did, that the case was going forward and it was going to now come out that he was lying about still having the footage shortly. If Kickstarter PBC had filed their appearance and motions several hours earlier yesterday, and Whitman had seen them, Whitman would have continued to refuse to detail the number of devices and what happened to each. On this I got lucky in how the timing played out plus Whitman start to cave on the court issue. Where last week Whitman was telling me that 'I want you to have to drive to court in New York', then on Monday, after I had given up on getting either defendant to do anything on appearing in person for about the Preliminary Conference, Whitman is all of a sudden calling the court clerk about arranging a telephone conference for the Preliminary Conference? Whitman is 'crying' in his filings that his car can't make the trip and he is so broke that he can't afford the trip, yet still will not try to get money for transferring the files? This is probably the most sincere and truthful any of us have ever seen Whitman in a long while. Whitman was not telling a 'sob story' in the hope of getting the court to agree to a telephone conference, his car is probably really not suitable for any long distance travel and Whitman was starting to fear that the case was going to require personal appearances in New York at some point and he was not capable of such a trip, even later this year, in all probability.

As more examples of how 'the files are really gone' makes sense and answers the questions as to why Whitman is acting the way he does:

Answer: Because the files are gone. Whitman can't agree to this because ZOE would find out the files were gone.

2: I try for months to get Whitman to say what he wants, but Whitman never says anything definite or keeps making excuses as to why and how he can't do a transfer to anyone and talks in circles all the time on issues, why?

Answer: Because the files are gone. Whitman has to name terms that Jolly plus Kenzer and Company would never agree to because if they did agree, they would find out the files are gone. Whitman also asks for something that makes little to no sense, what difference does it make it if Jolly or Kenzer and Company talk about the mess, over 3,000 people know and it is all over the place, yet somehow one is to believe that it would really help Whitman if they stopped talking (if they do at all) online about the project? Plus, once it came out that the files were gone, any talking online by Jolly or Kenzer and Company would pale in comparison to the fact that Whitman lost the files.

4: Whitman is offered 20 hours per week to work on the project by Marcus King, at Marcus King's expense, but Whitman turns King down, why?

Answer: Because the files are gone. At least for KODT:LAS, Whitman CAN'T work on that project because he does not have the files anymore. If Whitman takes Marcus King up on the offer, eventually Marcus King will wonder why no progress is being made on KODT:LAS, which Whitman can't make any progress on if there are no files to work with.

5: Whitman is asked multiple times by various people but changes his answer as to whether or not the files exist, why?

Answer: Because the files are gone. Whitman can't have people believing and knowing that he is so incompetent that he lost files that can not be recreated, but he can't just out and out tell everyone they are gone, Whitman has to be evasive as to whether or not they exist so no one is really sure of the status of the files. Which makes no sense when it is clear Whitman is broke but will not even name a price to transfer the files, but DOES make sense once you realize the files are gone and Whitman CAN'T deliver the files for any amount of money!

6: Why doesn't Whitman try to negotiate a price for the transfer of all of the raw footage?

Answer: Because the files are gone. If Whitman names a price, and someone meets that price, they will find out Whitman does not have the files anymore. 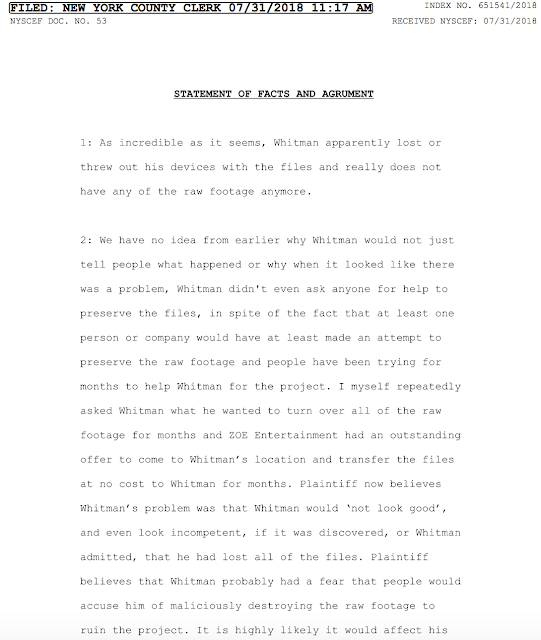 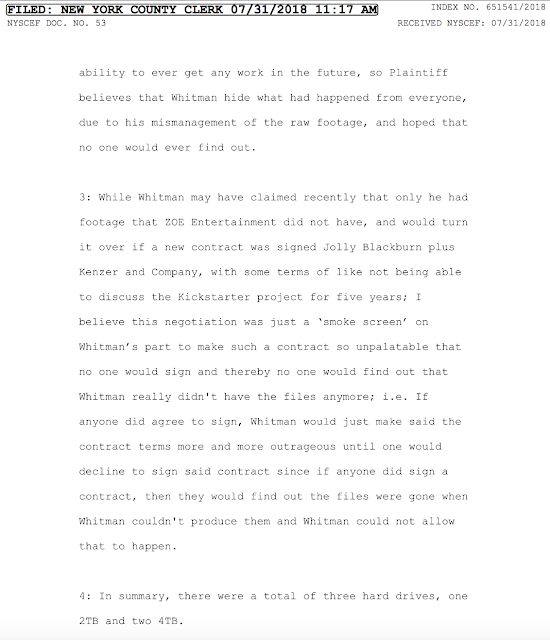