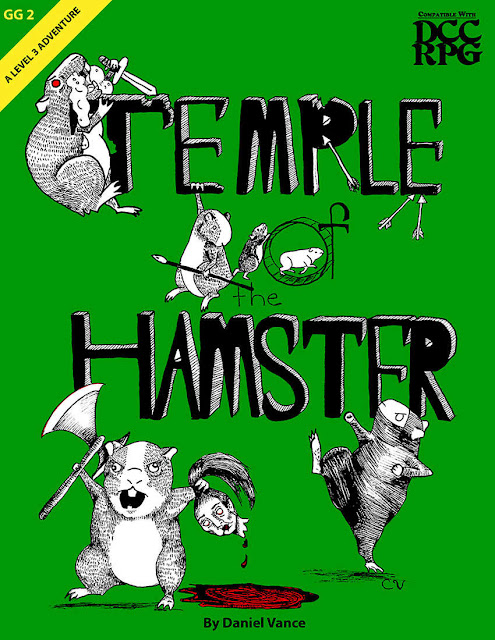 I don't do nearly as many reviews as I used to. The main reason is that I never seem to have the time needed to sit down and read the product in question. Heck, I have that issue with the gaming books I buy. I never would have guessed that retirement would lead to LESS free time ;)

This is my long-winded way of explaining that I've had a review copy of Temple of the Hamster in PDF for a week and a half and only now have gotten a chance to peruse it (there are other titles in the review pile, both older and more recent - I'm working on it)

Alright, so what exactly IS Temple of the Hamster? Its a DCC RPG adventure about giant hamsters. Sounds simple, but it isn't. There's a bit more here then is obvious with the first glance.


The town of Kamis lies in a panic. Townsfolk are missing and city watchmen lie dead; their sides split open from being over stuffed with grain. A stalwart cadre of adventurers must explore the town of Kamis and uncover the terrible mysteries of the Temple of the Hamster. These adventurers must brave terrible traps and minions before facing the dread peril at the heart of the temple. The Temple of the Hamster is packed with hamster style adventure and has been redesigned to have 100% more hamster wheels and mayhem. This level 3 adventure is compatable with the Dungeon Crawl Classics RPG and guaranteed to entertain even the stoutest hamster hating heart. Also be sure to look for more forthcoming adventures from Vance Games. Mother’s Maze is coming soon!

The hook is the PCs are incarcerated and this is their chance to redeem themselves (and get a pardon to boot) While this hook is perfect for a convention session (which is where I really think Temple of the Hamster will truly shine) if you want your regular party to get involved just remind them the town watch is dead, townfolks have gone missing and they are heroes. Or at least they are a close facsimile :) 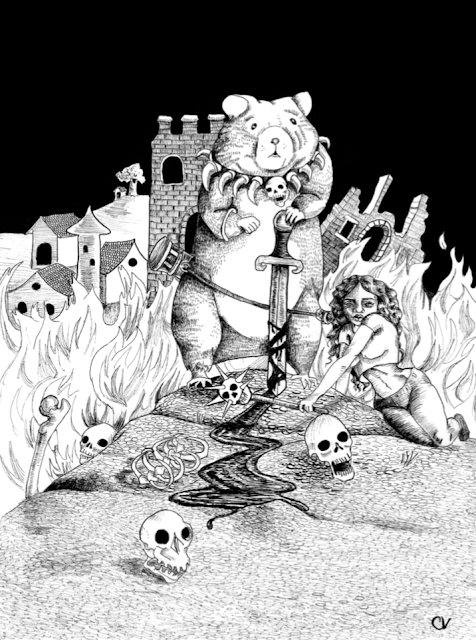 Yes, there are giant hamsters. Regular hamsters too. Hamster balls. Yep, it's a quirky adventure, but once your players get pulled along they'll soon find themselves immersed in hamster balls and giant ninja hamsters. Wait, maybe I said too much...

Beware, your player's characters can learn Hamster Style Fighting and may never be the same.

Now, it may be a bit too gonzo for some DCC RPG campaigns, but as DCC is pretty gonzo in the first place, this may not be an issue at all. As I stated above, for convention play, Temple of the Hamster is a perfect fit as is.

Yes, that's an affiliate link above. Affiliate links keep the taps flowing here at The Tavern :)