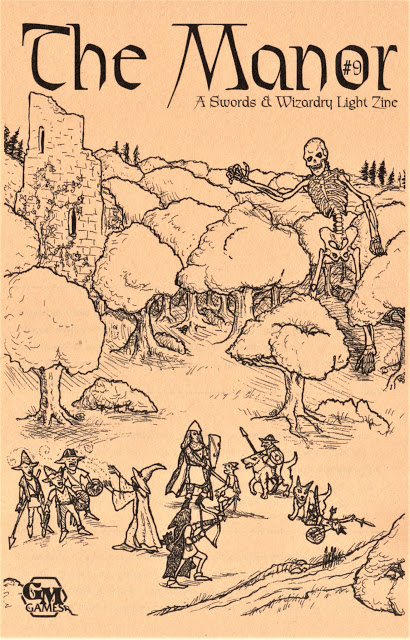 I've been subscribing to +Gothridge Manor / Tim Shorts The Manor since the first issue. I've used bits and pieces in my campaigns over the years. Its really good stuff.

The Manor #9 isn't just good stuff. Its awesome stuff, and I'm not just saying that because its an issue dedicated to Swords & Wizardry Light. I'm saying it because it simply is true.

First we get 4 god specific take on the Cleric class. While only cover through 3rd level (or 4th, depending on how you look at it) its easy to extrapolate the full seven levels for Swords & Wizardry Continual Light. Well thought and and inspirational for others that might want to do similar for their own campaigns.

Next up is a listing and defining of new monster traits. Monster traits are what makes monsters different from each other and this is a damn solid list. Tim, I'll be stealing this.

Then we get the table set - well, random table that is - with detailed encounters. I've already got this pegged for use in my SWCL game that is restarting in January at the Farmingdale Library out on Long Island.

Last but certainly not least, Tim gives us the Crooked Man Tavern. Its a tavern meant to be placed in a local dungeon and its oozing with atmosphere. Besides, I'm partial to Taverns. Now, how do I place this in Barrowmaze for next month's festivities? ;)

Yes, it was a long wait for the current issue of The Manor but it was well worth the wait.

Five Tavern Steins for The Manor, Issue #9 (and no short pours either). The Manor #9 is $2.50 in PDF from RPGNow and $7 for print from Tim direct (Gothridge Manor)

(did I mention the art i by +Denis McCarthy ? more awesome ;)

Yes, that's an affiliate link above. Help keep the lights on and the taps flowing here at The Tavern. Thank you.